Ernest Saves Christmas is a Christmas comedy film directed by John R. Cherry III and released by Touchstone Pictures in 1988. It was the third theatrical film starring Jim Varney as his commercial spokesman character, Ernest P. Worrell. It was filmed mostly in Orlando and Nashville around May 1988.

A man who claims to be Santa Claus arrives at the Orlando International Airport. Ernest P. Worrell is working as a taxi driver. He later picks up Santa, who tells him that he is on his way to inform a local personality named Joe Curruthers that he has been chosen to be the new Santa. Joe hosts a children's program in the Orlando area, similar to Mister Roger's Neighborhood, with emphasis on manners and integrity with the catchphrase "They never get old. They always stay new. Those three little words, 'Please' and 'Thank You'."

While they are driving, a runaway teenage girl who says her name is Harmony Starr joins Ernest and Santa in the taxi. When they get to their destination, Santa possesses no legal currency (only play money), so in his giving Christmas spirit, Ernest lets him ride for free. The decision gets him fired. Back at the taxi garage, he discovers that Santa left his magic sack behind in the trunk, and he begins a quest to find him and return it to him.

Santa arrives at the Orlando Children's Museum to talk to Joe, but is interrupted and rebuffed by his talent agent, Marty Brock. He misunderstands Santa's name, thinking he said "Mr. Santos", and continues to call him by that name, even when he tells him his real name. He begins to worry as he then discovers he lost his sack, and becomes more discouraged as he realizes he is becoming forgetful in his old age (he's 151 years old, indicating he was born in 1837). Joe does not believe his story and Marty has him arrested. Meanwhile, Ernest goes over to his neighbor Vern's house to put up a Christmas tree. He poses as Astor Clement, an employee of the governor and Harmony as the governor's niece, and they help Santa escape from jail by convincing the police chief that believing that he is Santa Claus is "infectious insanity" and he must be taken to solitary confinement. Ernest disguises himself as an Apopka snake rancher (Lloyd Worrell from Knowhutimean? Hey Vern, It's My Family Album) who sneaks Santa into a movie studio and speaks to a security guard about delivering the snakes to people who direct horror films. Meanwhile, Marty presses Joe to quit his children's job, shave his beard, and instead land a part in a horror film titled Christmas Slay a movie about an alien which terrorizes a bunch of children on Christmas Eve which offends Santa so deeply he punches the director in the eye.

Santa tracks down Joe at his home, but he finally tells him, "Thanks...no thanks." Later on, however, he is overcome by conscience when the director wants him to use foul language, which he refuses to say in front of the children on the set.

Ernest and Harmony discover the magic power of Santa's sack, and immediately Harmony starts to abuse it. She steals it, and attempts to run away yet again. On Christmas Eve, however, her conscience prevails, and she rushes back to find Ernest and Santa and return it.

Eventually, Joe hunts down Santa on Christmas Eve and accepts the job. For the first year, however, Ernest gets to drive the sleigh. The film ends with, "Merry Christmas To All And To All A Good Night," followed by a sleigh dash that spells, KnowWhatIMean?, one of Ernest's catchphrases. 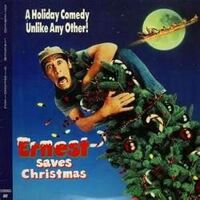