The special centres around the prospect of what Father Christmas does with himself "the other 364 days of the year", along with his annual delivery of presents to children around the world. It starts with Father Christmas coming back from his annual Christmas Eve run, and relaxing in his home with his cat and dog. He then breaks the fourth wall, explaining that his unwinding is well deserved, contrary to popular belief. He cites the care of his two reindeer, his garden, and shopping among others as activities that take up his time. Because of his strenuous lifestyle, he explains that in the past year he decided to take a holiday.

In a flashback, it is shown that after bringing home brochures, and audibly considering Italy, Greece, Ireland, Holland, Canada, Germany, Tunisia, and Switzerland, he finally settles on France. However, when he imagines camping in a rainstorm, he decides on the need for a camper van. He converts his sleigh into one, listening to French secondary language tapes while he is working.

After packing and putting his pets in a boarding kennel, he flies off to France with his reindeer. While out shopping, he realizes that he looks too much like a tourist and buys some new clothes, although by choosing a stereotypical outfit he stands out even more. He then goes to a fancy restaurant and eats fish, lobster, kidney, escargot, ice cream and lots of French wine. Unfortunately, he ate far too much of the rich food, and contracted himself to food poisoning and diarrhea. In the morning, he realizes that his reindeer are attracting some attention, even leading to speculation that he is Father Christmas. He decides that it's time to move on, choosing Scotland for the purity of its water.

Unfazed by the rain, and saying morning to a seal in the loch, Father Christmas goes to a pub where he got drunk with a Scotsman. When he got out of the pub, he came across a kilt shop and bought himself a kilt, where when shopping, a little girl pointed and said that he is "Santa Claus". The following day, after recovering from a drunken headache, he decided to move on again, he then found that the rain had stopped, and goes to take a swim in the nearby lake: Unfortunately, the water is very cold, as well as shark-infested. Grumbling to himself after that experience, he decided to go somewhere hot, and what better than Las Vegas as his next stop.

He stays at Nero's Palace (a spoof of Caesars Palace) for over a month, enjoying the casino, pool, room service, entertainment, golf courses, and cuisine extensively. A combination of running low on money and kids suspecting that he is "Santa Claus" makes him choose to go home, but not before paying the huge hotel bill.

He comes back to an overgrown garden, and after he picks up his dog and cat, he finds his front door blocked by letters piled up behind it. He starts sifting through them, commenting on all of the different names that children call him. Shortly thereafter, a postman delivers more bags of post. There is more looking at letters amongst daily activities, and then a truck comes and dumps an entire load of post on the ground. After he is finished with the post, he picks up his suit from the dry cleaners and goes to sleep. After dreaming of relaxing in a pool surrounded by women back in Vegas, his alarm goes off and he gets ready to go out.

Father Christmas loads up his sleigh, hitches up his reindeer and sets off delivering presents (with a snack break in the middle). There is a thunderstorm, fog, and of course heavy snow to deal with. Events include getting stuck on a television antenna, stumbling in on a fancy dress party, and finding a way into a caravan and an igloo.

After he is finished, he goes to the annual snowmen's party. While he is there, he greets a young boy and his snowman, who go to see his reindeer that are being kept in a stable. They find two presents that have not been delivered, having fallen under the sleigh's back seat: they are for the British Royal Family. Father Christmas quickly flies off again, and makes it to Buckingham Palace just in time, arriving at 6am.

He then flies back home, coming out of the flashback. After putting a turkey in the oven, taking a bath, and giving his pets presents, he critiques presents received from his relatives. Father Christmas climbs into bed, wishing everyone a merry Christmas. The camera then zooms out to the immediate area, where church bells can be heard ringing out on Christmas morning.

VHS (United States)
The original US VHS of the special. 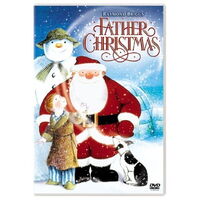 DVD (United States)
The original US DVD of the special.

Retrieved from "https://christmas-specials.fandom.com/wiki/Father_Christmas_(TV_Special)?oldid=164118"
Community content is available under CC-BY-SA unless otherwise noted.