Four Christmases (also known as Four Holidays in Australia and New Zealand, and Anywhere But Home in the Netherlands, Norway, United Arab Emirates, and South Africa) is a movie starring Vince Vaughn and Reese Witherspoon, released by New Line Cinema on November 26, 2008.

In a bar, a geek named Brad tries to hit on a confident Kate, who blows him off. After a short fierce exchange the two are having sex in the bathroom, and running off to the San Francisco trolley to their house, where we find that they are roleplaying, and have been happily together for 3 years. Both are wealthy, successful, and happy with their relationship as it is and have no plans for marriage. They simply want to enjoy life while being with each other, even telling so with glee to a married and engaged couple. During the conversation, Brad and Kate reveal that they are both from broken homes, and don't want to repeat that, or bring a child into one either.

Later, at a company Christmas party, two of their coworkers dread their Christmases with family, while Brad and Kate happily discuss their plans to go to Fiji. They lie to their parents each year, saying they go do civil service like helping starving children in China, so they can escape scot-free. While the coworkers are appalled, Brad reminds them that "You can't spell lies without families."

On Christmas Day, Brad and Kate prepare for the trip, telling their parents that they are going to inoculate children in Burma, and head for the airport as the San Francisco fog rolls in extra thick. By the time they arrive at the airport, all flights have been canceled due to fog. Before they can make plans to stay at the hotel and wait for the fog to lift, the local live news comes and interviews the couple. They both stumble for answers, unable to lie about their true destination because there's a good chance their families are watching. Sure enough, right after they're interviewed they start receiving phone calls. They end up making plans to visit all their parents within one day.

As Brad and Kate pull up to the farm where Brad's father lives, they agree to a safe word of "Mistletoe" to signal that they should get out, but it's clear Brad doesn't want to go in at all. Brad's father, Howard, greets them warmly. Also there are Brad's brothers, Dallas and his two children, and Denver and his wife and baby. Dallas and Denver start to beat on Brad, calling him Orlando. When Kate asks, Brad's brothers reveal that they were named after the cities they were conceived in: Kate is appalled that Brad never told her his real name, and Brad tries to explain that his brothers are like MMA fighters that just brawl in backyards and upload the footage to YouTube.

Kate convinces Brad that he's a grown man, and can demand his space from his brothers. Brad has a talk with his brothers about boundaries and respect. The two answer by beating him again, with even Dallas' children getting into the act. Howard breaks the fight by asking to have the presents handed out. Just as Denver's wife mentions the $10 cap that everyone agreed to Brad hands Dallas' kids a brand new Xbox 360. His brothers are appalled, not only because they feel that Brad is showing off just how much he makes, but that it makes their own presents look horrible (Dallas got one of his kids a cheap flashlight). Brad ruins it further by accidentally revealing that there's no Santa Claus. Screaming that nobody loves him one of Dallas' kids strips off his clothes and runs out the window (As someone mentions, when he can't express himself he goes streaking. He'll be back.) Howard's gift is a new satellite dish, which he takes up to the roof to install with his boys.

Kate waits with Denver's wife in the kitchen, who asks Kate to hold her baby while she cooks. Kate seems uncomfortable with the baby, but slowly grows used to it. Meanwhile Brad is installing the dish while his brothers mock him. Howard mentions his ex-wife calling her a whore. Brad is offended. Howard also mentions the same thing Brad did, about lies in families. He then goes down to check the signal, while Brad points the dish in different directions to get a clear signal. The dish pops off and he falls off the roof, dragging the cable wire all along the living room and destroying it, even pulling the TV up into the ceiling before it catches fire. Shocked by the noise, Kate swings and slams the baby's head into an open cabinet door, angering the mom. Brad and Kate quickly leave after this.

As they pull up, Kate's house has a statue of Jesus on the front lawn. Kate is surprised, and as they go in we meet her mother Marilyn, her sister, two aunts, and grandmother, all of whom find Brad to be very attractive. We quickly learn that Kate was picked on as a kid. Her nickname was "Cootie Kate" and was tormented, eventually leading to a traumatizing experience in a moon bounce/jumpy jump. Of course, there's one outside for the kids.

Marilyn's newfound love of religion is based on her current boyfriend, Pastor Phil. They give each other the gift of verbal promises (which disappoints the sister's kid) which includes the grandmother promising her husband more sex. As they're sharing Kate is given a baby to hold, who throws up all over her. Brad reacts horribly, the smell making him want to throw up too. Kate goes to change in the bathroom, having to wear an old sweater and jeans. She finds a pregnancy test and decides to try it. Soon, her relief is disrupted when Katie, her niece, comes into the bathroom careless of Kate's instance on the toilet or Kate's claims of returning her the pregnancy test which she opts to steal. She runs into the moon bounce where Kate tries to follow.

Meanwhile, Kate's family shows Brad their photo album, which shows Kate was once so fat she went to fat camp and had a lesbian friend in high school. The kids torment Kate in the moon bounce and even drop kick her out of it before she snaps, closing the door to the moon bounce and flinging kids left and right to get her test. When the niece puts it in her mouth Kate happily tells her that she peed on it, making the kids stop cheering and start to look sick. She looks at the test, sighing, before trying to talk to her mom. However Marilyn is too obsessed with making sure everyone is ready for Pastor Phil's sermon. Kate changes back to her now clean regular clothes but Brad is laughing at her. He mentions how he's not as fazed by her large weight as a kid or her lesbian friend (whom Kate didn't initially realize was lesbian), so Kate shouldn't be so mad about the Orlando thing.

We find out Pastor Phil runs a very flashy church and needs volunteers to star in the play of the birth of Christ. Wanting to impress him Marilyn "volunteers" Kate who gets Brad to go up with her. On stage Kate gets stage fright and can't remember her lines or actions while Brad hams it up and mocks Kate much to the crowd's delight. The two leave. Kate is upset that Brad threw her to the wolves but Brad doesn't understand what was so bad about it.

In a short visit they come to visit Brad's hippie mom. Things quickly turn sour as we meet Brad's stepdad, who tells Brad that he knows he can't be a father but he just wants to be a friend. Brad answers "You were my friend. You were my best friend growing up, and then you married my mom," to which he answers"To be fair I didn't have a sexual attraction to your mom until I was 30." Turns out that they are incredibly sexually active, which disgusts Brad. Kate has brought board games though, and they decide to try Taboo.

Denver is there with his wife, still angry at Brad over the incident at their dad's. The couples start to play, with one person trying to tell the other to say a key word without using any words from a short list. They try by using their personal experiences with each other. Brad's mom and stepdad do well, but all their clues are sexual. Denver and his wife play like professionals, knocking out word after word. But when Kate tries to tell Brad clues based on her life Brad gets angry wanting more specific clues. He clearly has no clue about anything involving Kate outside of what he's done with her.

As they leave, Kate is upset and Brad tries to comfort her by forgiving Kate for the bad clues. Kate mentions that she took the pregnancy test and Brad freaks out. She reveals that the test was negative but it made her think of wanting something more than the "friendship" that she and Brad have. Brad will have none of it. He's happy the way they've been and he wants to stay that way.

As they pull up, Kate tells Brad that he doesn't have to come in. He insists but she doesn't want to lie to her parents anymore about their relationship. He leaves and Kate's father comes out to greet her. Upon going in, Kate is shocked. Marilyn and Pastor Phil are there too, getting along well with everyone. Kate asks her sister, saying she thought that their mom and dad hated each other, but they stopped and started gathering when their granddaughter was born. Kate goes upstairs to be alone for a bit when her father comes in and reveals that he always knew she was lying about leaving for Christmas. He isn't upset, but warns her that he used to make lies to avoid his family, and many divorces later, he now wishes he had that time back.

Brad goes back to see his dad, who is drinking on the porch. When Brad tells him that Kate offered to make a family with him and he said no, his dad finally seems happy. He tells Brad that he's the smart one, not falling for getting married, and says how they're alike. This frightens Brad, knowing that he has become his father. He goes upstairs to his old room, where all his old toys and awards (all in his birth name, Orlando) are still arranged. He goes back to see Kate, who at first doesn't want to see him. He does convince her that he is there to talk to her about having kids and getting married "sometime, not right now but sometime." The two talk about the advantages and tax breaks that being married and having kids would bring.

It's New Years Day, just after midnight, and Brad and Kate are amazed that they just had a baby. The nurse comes in and tells them that if family is waiting they're now allowed to come and visit. Brad and Kate look at each other before revealing that they never even told their parents that Kate was pregnant. The nurse gives them a funny look and leaves, just as a live news crew comes to interview them about having the first baby of the new year. As they stare nervously, just before Kate can answer the baby throws up all over her and Brad. 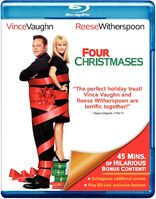