Frederick "Fred" Flintstone is the main character from the Hanna-Barbera animated television series The Flintstones. He lives in the city of Bedrock with his wife Wilma, his daughter Pebbles, and his pet dinosaur Dino. His best friends are his next-door neighbors, Barney and Betty Rubble, who live with their adopted son Bamm-Bamm. Fred is known for his loud voice and generous girth, both of which make him an admirable proxy for Santa Claus in various Christmas specials. In 2002, he and Barney were ranked #6 in TV Guide's Top 50 Greatest Cartoon Characters.

In "Christmas Flintstone", the Christmas episode of the original Flintstones series and the series' first Christmas production, Fred gets a secondary job at Macyrock's department store in order to afford money for his family's Christmas presents. He ends up playing the role of Santa Claus at the store when their original hired Santa is unable to show up. Fred does such a good job at portraying Santa that two of Santa's elves, Blinky and Twinky, later recruit him to fill in for the real Santa, who is suffering from a cold.

Chronologically, the next Christmas production starring Fred is the franchise's fourth Christmas special, A Flintstones' Christmas Carol, as it appears to take place after "Christmas Flintstone" and several years before A Flintstone Christmas. In this 1994 made-for-TV movie, Fred lands the starring role of Ebonezer Scrooge in the Bedrock Players' production of A Christmas Carol. He becomes so obsessed with the role that he becomes oblivious to the needs of his family and friends. Eventually, though, while performing his part in the play, Fred finally realizes how much of a jerk he has become to everyone and makes amends after the play is over.

In the 1977 TV special, A Flintstone Christmas, which was the second Flintstones Christmas production made but is the third in chronological order, Fred's role is rather similar to his role in "Christmas Flintstone". Here, his wife Wilma requests for him to play Santa at the Ladies Auxiliary's Christmas party for the Bedrock Orphanage. Fred initially refuses the offer, but he eventually agrees to it after his boss Mr. Slate makes the same request to him. That evening, though, before Fred can head off to the party, the real Santa Claus (whom Fred initially mistakes for a Salvation Army Santa) falls off of Fred's roof, spraining his ankle and catching a cold. Just like in the original series' Christmas episode, Fred fills in for Santa on his Christmas Eve journey, this time assisted by Barney. In the process, Fred almost forgets about the party, but soon remembers, and after managing to deliver presents all around the world, he and Barney finally make it to the Christmas party just in time to give presents to the orphans.

Finally, in the 1993 special A Flintstone Family Christmas (which was the third one produced but is the fourth and last in chronological order), Fred meets Stoney, a mischievous caveless kid, while waiting for Pebbles, Bamm-Bamm and his grand-children to arrive in Bedrock for the holidays. Fred does not get along well with Stoney at first, but over the course of the special, he eventually bonds with the kid, and at the end of the special, he and Wilma adopt Stoney.

Fred and Barney make an anachronistic cameo appearance in Yogi Bear's All-Star Comedy Christmas Caper. Snagglepuss spots the pair serving as street corner Santas and points out that they're in the wrong century. Fred explains that the Loyal Order of Water Buffaloes is throwing a Christmas party for the kids back in Bedrock, and they are collecting money for it. Snagglepuss doesn't have any money to donate, so Fred gets him to go ask a nearby woman for a donation. The woman mistakenly thinks Snagglepuss is a vicious lion, and Fred and Barney pretend to attack him, subduing the "vicious lion," and thus garnering admiration and monetary largess from the woman.

Fred, along with Wilma, makes a cameo in a drive-in movie seen in "A Jetson Christmas Carol". 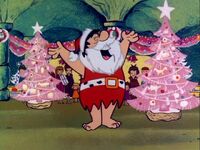 Fred as Santa in "Christmas Flintstone". 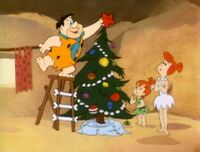 Fred putting the star on his Christmas tree in A Flintstone Christmas. 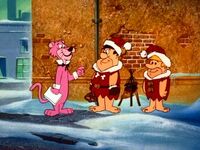 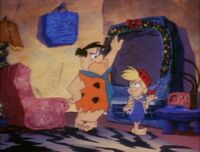 Fred with Stoney in A Flintstone Family Christmas.
Add a photo to this gallery

Retrieved from "https://christmas-specials.fandom.com/wiki/Fred_Flintstone?oldid=162118"
Community content is available under CC-BY-SA unless otherwise noted.