Scooby-Doo
Fredrick Herman "Fred" Jones is a character from the Hanna-Barbera animated television series Scooby-Doo. He is the self-appointed leader of the Mystery Inc. gang, and he is the driver of their van, the Mystery Machine. He is also typically the boyfriend of Daphne Blake in newer iterations. A statuesque and brave youth, he is the polar opposite of the group's other male human member, Shaggy Rogers. In later spin-offs, Fred is also shown as having a great interest in various types of sports. During the series' run, Fred would often be shown constructing various Rube Goldberg-esque traps for villains, which Scooby-Doo and/or Shaggy would often set off by mistake, only for the villain to wind up captured by the trap anyway. 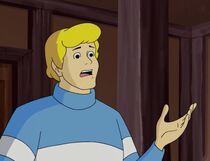 Fred in A Scooby-Doo Christmas.

Fred leading the group in Scooby-Doo! Haunted Holidays.
Add a photo to this gallery

Retrieved from "https://christmas-specials.fandom.com/wiki/Fred_Jones?oldid=184621"
Community content is available under CC-BY-SA unless otherwise noted.