Frosty is the title character of the beloved Christmas song "Frosty the Snowman", and a featured character in multiple Christmas stories, most notably several Rankin/Bass specials.

At the beginning of the original 1969 special, Frosty is built by Karen and her friends right after school has closed for Christmas vacation. The wind blows the top hat of Professor Hinkle onto Frosty's head, and suddenly the snowman comes to life, saying his cheerful catch phrase, "Happy birthday!" Frosty is good-natured and playful, but also somewhat naive due to his relative youth (having just been "born"). He is unable to count above five and is the world's fastest belly-whopper.

Frosty later appeared in stop-motion animation in the movie Rudolph and Frosty's Christmas in July. His design in this film was largely the same as his Winter Wonderland appearance, except his hat was now colored orange (despite being the same magic hat) and his eyes were re-colored blue. By now, he and Crystal have two snow children, Chilly and Milly (the means by which snow people procreate is ignored; possibly, they simply built their own children out of snow). In this production, Frosty is best friends with Rudolph, who serves as adoptive uncle to the children. Frosty and his family accompany Rudolph to Lilly Loraine's Circus by the Sea in Florida, protected by magic amulets provided by the evil Winterbolt, so they can help Rudolph's friend, Milton the Ice Cream Man, with saving his girlfriend's mother's circus from foreclosure.

The Legend of Frosty the Snowman features Bill Fagerbakke as the voice of the Rankin/Bass version of Frosty. (Coincidentally, Bill Fagerbakke had previously voiced a parody of Frosty, played by Patrick Star, in the Merry Nickmas short "Patrick the Snowman" a few years earlier.)

Disney featured a costumed version of Frosty in the Magic Kingdom Yuletide Special.

Frosty Returns, an unofficial semi-sequel to the original Rankin/Bass special, features John Goodman as the voice of Frosty, who this time concerns himself with the effects of environmental pollution. Notably, Frosty in this special does not require a magic hat to be alive, even though he still wears a top hat throughout most of Returns (borrowed from his friend Holly in the special).

Another parody version of Frosty, voiced by Clancy Brown, appears in Phineas and Ferb Christmas Vacation!, as a snowman that Perry the Platypus brings to life while on his way to his agency's Christmas party. He says to Perry "Hello, wintertime's fun. Follow me!" and then walks off into the street and gets crushed by an offscreen truck. At the very end of the special, Perry fixes him back up, and he is about to walk into the street again, but this time decides against it when he sees a truck smash into a vegetable stand.

In Elmo's Christmas Countdown, Stan the Snowball, impressed that Stiller the Elf is taking part in the story he's narrating, remarks that Stiller is as famous as Frosty.

Frosty was the theme of Gaylord Palm's ICE! event for 2013. 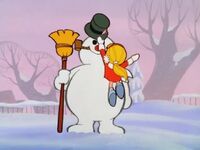 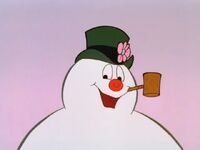 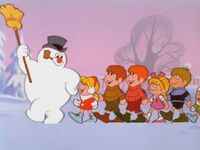 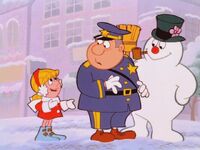 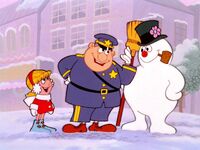 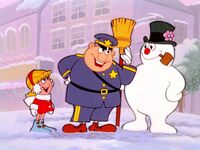 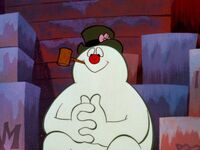 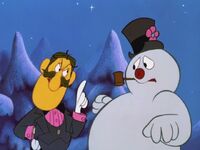 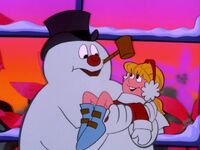 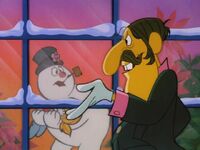 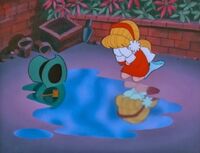 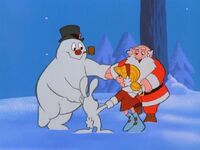 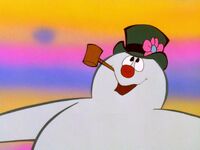 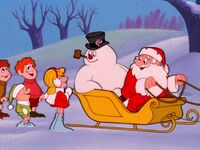 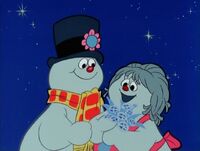 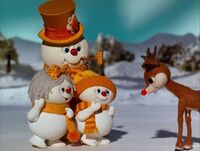 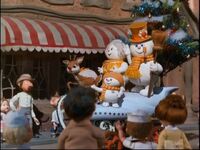 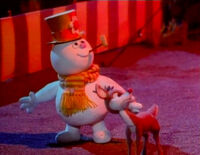 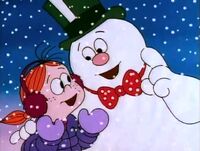