This article is about the 1969 Rankin/Bass special. For the original song, see Frosty the Snowman (song).

Frosty the Snowman is an animated Christmas special that first aired on CBS on December 7, 1969. This special, written by Romeo Muller and produced and directed by Arthur Rankin and Jules Bass, is based on the holiday song of the same name first performed by Gene Autry in the 1940s and originally written by Jack Rollins and Steve Nelson.

One December afternoon, a girl named Karen and her friends create a snowman after school. After several suggestions of what to call their snowman (including "Oatmeal" and "Christopher Columbus"), Karen decides to name him "Frosty." They later acquire a top hat discarded by inept magician Professor Hinkle. When Karen places it on top of Frosty's head, the snowman comes to life (and always says "Happy Birthday!" in response). When Hinkle learns of the magic power his hat actually possesses, he takes it back and departs, pretending that he did not see Frosty come to life. However, the professor's pet rabbit, Hocus Pocus, returns the hat to Frosty.

Frosty soon senses the temperature is rising and worries about melting. The children suggest putting him on the next train to the North Pole, where he will never melt, and they all parade into the city on the way to the train station, where Frosty has his confrontation with the traffic cop mentioned in the song's lyrics. When Karen explains that Frosty came to life and doesn't know what a traffic light or a lamp post is, the traffic cop lets Frosty go. At the train station, Frosty stows away aboard a refrigerated train car, since neither he nor the children have any money for a train ticket. As the train is about to leave the station, Karen and Hocus decide to join Frosty for the ride to keep him company. With that, Frosty, Karen, and Hocus wave goodbye to the other kids as the train takes off. Unknown to them, Hinkle has also hitched a ride on the same train, intending to get his hat back.

As the train continues up north, Frosty notices Karen is freezing, so they jump off the train, leaving Hinkle behind once again. Hinkle, seeing them escape, jumps off the train too, but falls down a mountain and crashes into a tree where a pile of snow falls on him and a squirrel laughs at him. At Frosty's request, Hocus convinces some forest animals that are preparing for Christmas to build a campfire for Karen. Fearing that Karen still cannot survive for long in the cold weather, Frosty asks Hocus who might be able to help them. Hocus suggests (by pantomiming) the President of the United States and the United States Marines, before suggesting Santa Claus. Frosty agrees, and promptly takes credit for the idea himself (much to Hocus' dismay). Hocus hops off to get Santa, but Hinkle then confronts Frosty and Karen once more and blows out Karen's campfire. Frosty and Karen are again forced to flee, this time with Karen riding on Frosty's back as he slides head-first down a hill. At the bottom of the slope, Karen and Frosty discover a greenhouse filled with poinsettias. Despite Karen's objections, Frosty steps inside the warm greenhouse with her, suggesting that he could afford to lose a little weight. Unfortunately, Hinkle catches up to them immediately after and locks them in the greenhouse.

Hocus brings Santa Claus to the greenhouse only to find Karen in tears and Frosty melted on the floor due to Hinkle's cruel act. Santa explains to Karen that Frosty is made from Christmas snow, and that he can never completely melt away. With a gust of cold wind through the open greenhouse door, the puddle that was Frosty blows out the door and magically changes back into his typical snowman form. Before Santa can put the finishing touch on Frosty and bring him back to life, Hinkle again arrives on the scene and again demands the return of his hat. He relents only when threatened with being removed from Santa's Christmas list for the rest of his life if he put one finger on the hat. Santa states that if Hinkle is truly repentant for his mean attitude and harming Frosty, and if he goes home and writes "I am really sorry for what I did to Frosty" a hundred zillion times, he may find a gift in his stocking on Christmas morning, which makes Hinkle bid Frosty and Karen farewell and run home to repeatedly write his apologies, assuming he may get a new hat. Santa then places the magic hat back on top of Frosty's head and the snowman returns to life again. After celebrating, Santa takes Karen home and Frosty to the North Pole, but promises that Frosty will be back next winter.

The end credits show all the characters the next Christmas marching through the town square with Frosty in the lead, singing the "Frosty the Snowman" song. Among them is a redeemed Professor Hinkle, who is proudly wearing his new top hat. At the end of the parade, Frosty gets back into Santa's waiting sleigh and they return to the North Pole, with Frosty proclaiming, "I'll be back on Christmas Day!"

CBS has broadcast this special in the USA since its debut, even after the pre-1974 Rankin-Bass library was sold first to Broadway Media, then to Golden Books and then with Classic Media, a successor of the British-owned Entertainment Rights company, which was purchased by Classic Media's own successor, Boomerang Media. As of July 2012, Dreamworks Animation SKG purchased Classic Media, and currently holds those rights. In Canada, CBC holds broadcasting rights. 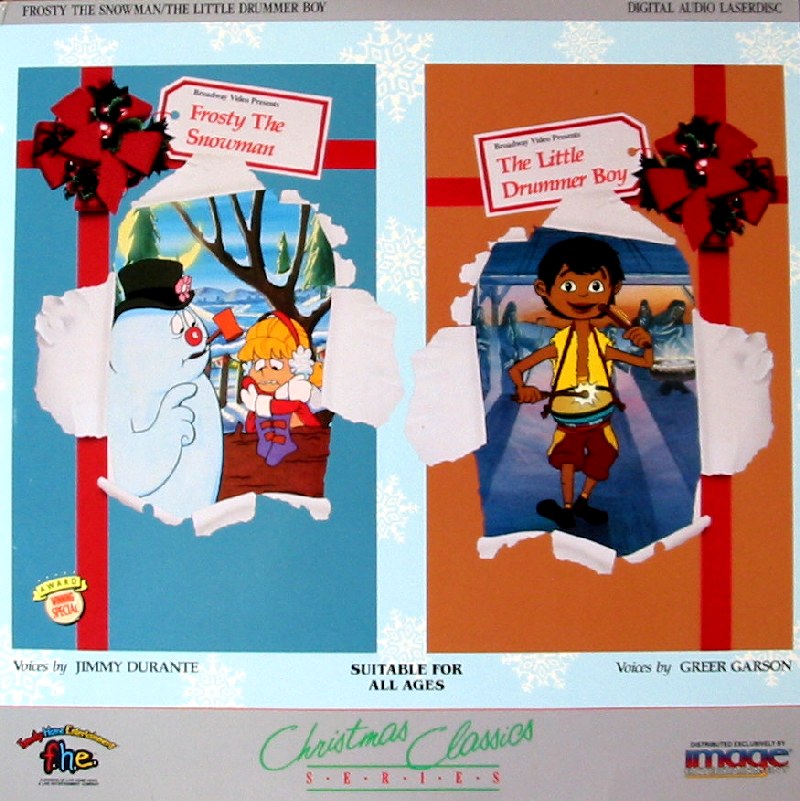 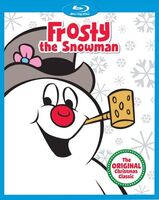 Blu-ray
Vivendi Entertainment, 2011
Add a photo to this gallery

Retrieved from "https://christmas-specials.fandom.com/wiki/Frosty_the_Snowman?oldid=45977"
Community content is available under CC-BY-SA unless otherwise noted.