A sold-out show for the Christmas Circus can't stop Boko, a purposeful (and cantankerous) parrot, from weaseling Willie Weasel's tickets away. Squirrel Ginger is the ringmaster for an animal circus. A parrot has snuck in using a weasel's ticket; the weasel keeps trying to enter as well, but keeps getting thrown out. The parrot heckles, and is also thrown out. The weasel prepares to clobber the parrot, but a mole pops up with a "Peace on Earth" sign which the weasel smashes on the parrot. 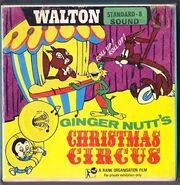 Retrieved from "https://christmas-specials.fandom.com/wiki/Ginger_Nutt%27s_Christmas_Circus?oldid=166824"
Community content is available under CC-BY-SA unless otherwise noted.