Go, Santa, Go! is the latest Christmas sing-along video featuring The Wiggles. It was released in Australia in November 6, 2013 and is expected to be released in the US sometime in October 28, 2014. And the US re-release On October 10, 2017 by Kino Lorber.

The Wiggles have Christmas at Wigglehouse. They have a Christmas picnic and do their annual Christmas hula. Lachy gets a phone call from Santa, who needs help. Lachy makes the elves football player sized. The Wiggles help Santa deliver the presents in time. When The Wiggles arrive back to Wigglehouse, they notice that it had a "spring clean" from Zamel the Camel and Captain Feathersword. They have fun with Emma's Christmas bow and they sing "Ding Dong Merrily on High" and then they decorate the tree with their friend Dorothy the Dinosaur. Anthony ask The Wiggles and Captain Feathersword their holiday dream destination. The Wiggles are singing together and they need someone else, Henry the Octopus. The kids do a nativity play while the Wiggles sing "Silent Night" and then they do their own nativity play. 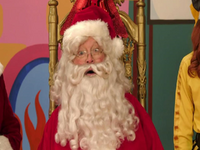 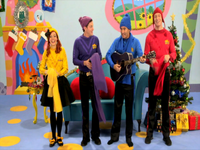 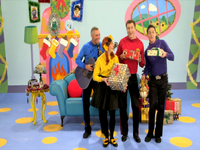 Add a photo to this gallery
Retrieved from "https://christmas-specials.fandom.com/wiki/Go,_Santa,_Go!?oldid=153564"
Community content is available under CC-BY-SA unless otherwise noted.