Good Luck Charlie, It's Christmas! is a made-for-TV Christmas film based on the Disney Channel sitcom Good Luck Charlie, originally aired on December 2, 2011. Notably the show's first Christmas production, and also the first Christmas-themed Disney Channel Original Movie since 2001's 'Twas the Night, it was directed by Arlene Sanford and written by Geoff Rodkey, and it stars Bridgit Mendler, Leigh-Allyn Baker, Bradley Steven Perry, Mia Talerico, Eric Allan Kramer, and Jason Dolley as the Duncan family. It follows them on their road trip to Amy's parents' house for Christmas.

The Duncan family plan to go to Amy's parents' house in Palm Springs for Christmas. However, they are separated en route after Teddy makes a snap decision to give up her airplane seat for a free ticket for her spring break trip to Florida with her best friend, Ivy. Unwilling to let her travel alone, Amy also disembarks, only to discover that the next flight to Palm Springs departs after Christmas. Meanwhile, the rest of the family arrives there, but things aren't any easier as Bob tries to care for Charlie under the watchful eye of Amy's mother, Petunia, who strongly dislikes him; P.J. learns the pros and cons of the pool after getting sunburned; and Gabe quickly realizes the downfalls of teaching his grandfather, Hank, how to play his favorite video game after Hank becomes addicted to it.

Stranded and in desperation, Teddy and Amy find unconventional ways to get to Palm Springs before Christmas, while keeping in contact with Bob via cell phone. On their journey, Teddy finds out that Amy is pregnant again. When they arrive in Las Vegas, they get into an argument, which they later make up. Hungry, they sing and perform Christmas carols to get money for food, as someone has stolen their luggage. Amy then wants to turn their arguments into a Broadway musical. Later, they find Jordan, the luggage thief, and confront her. She apologizes for doing so, breaking down in tears and explaining her situation. Since she is unable to afford a plane ticket, Teddy gives her the free one so she can get home for Christmas. This gesture helps Teddy and Amy bond from their previous arguments.

P.J., Bob, and Gabe travel to Las Vegas to get Amy and Teddy, but are mistakenly kidnapped on the way and participate in a paintball match based on Gabe's video game so that they can return to their car. Gabe wins it by taking the "Stone of Mitrios", which he was already planning to do. In return, they get a free helicopter ride to save Teddy and Amy. Petunia and Hank then arrive with Charlie by car, and the entire family is finally reunited. Amy admits that not only did they finally got the Christmas vacation they wanted, but also that this was the best Christmas they've ever had. She then reveals that she is pregnant again, much to everyone's joy.

In the epilogue, on the way back home, Gabe attempts to put the "Stone of Mitrios" in an overhead bin, but it is taken away by a flight attendant. Another one then announces the offering of a free plane ticket, which Teddy quickly accepts once again. Amy says to Bob, "Your turn," as it is his turn to go along with Teddy in leaving the plane. He obediently goes after her, jokingly reminding Amy that they will be back by New Year's. She smiles in response and says that she knows they won't. 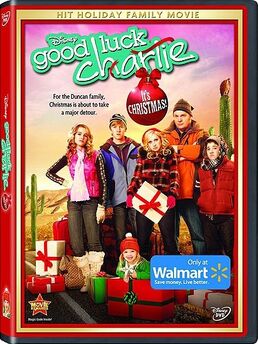 A DVD of the movie, sold exclusively at Walmart, was released on October 23, 2012.