Goofy G. Goof is a character who stars in various cartoons and media from Walt Disney Productions. He is a tall, anthropomorphic dog who is a close friend of Mickey Mouse and Donald Duck, as well as the father of Max Goof in later cartoons. Goofy is normally characterized as extremely clumsy and having little intelligence, yet this interpretation isn't always definitive; occasionally Goofy is shown as intuitive and clever, albeit in his own unique, eccentric way. Originally named Dippy Dawg, he debuted in the 1932 cartoon Mickey's Revue. During the 1930s he was used extensively as part of a comedy trio with Mickey and Donald, and was eventually given his own series in 1939. Many of his solo shorts featured him following the directions of an offscreen narrator, in his typical bungling fashion. Even after his theatrical short series ended in 1961, Goofy continued to star in numerous other projects, such as the 1992 television series Goof Troop and its 1995 theatrical film, A Goofy Movie.

Goofy's cameo in From All of Us to All of You. 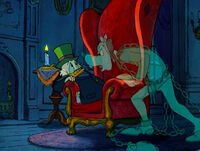 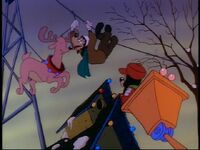 Goofy decorating his house for Christmas. 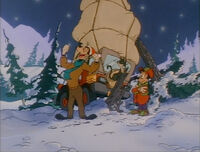 Goofy and Max arrive in Asprin. 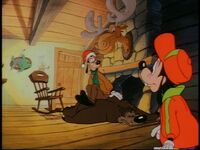 Goofy mistakes a bear for a rug. 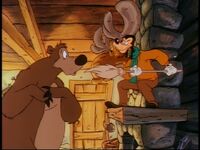 Goofy aims a mop at the bear... 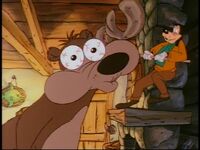 ...and somehow manages to fire a shot from it. 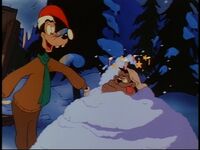 Goofy finds that Pete is vacationing in Asprin too. 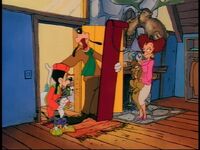 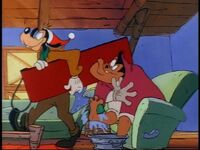 Goofy hits Pete with his toboggan. 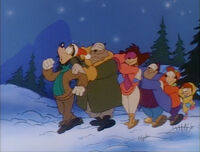 Goofy takes everyone out to see his giant tree. 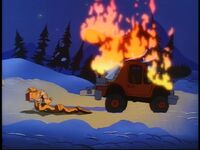 Goofy manages to save Max's present from his burning car. 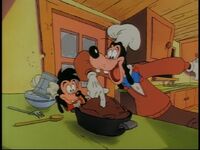 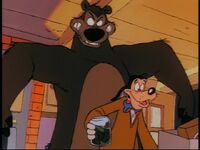 Goofy is unaware of the bear having invaded the kitchen. 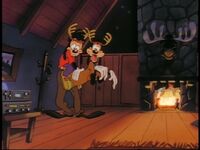 Goofy tries to cheer up Max. 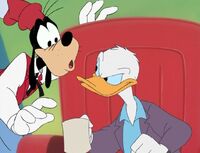 Goofy and Max in CGI.

Goofy with Mickey and Donald in "Duck the Halls".