He-Man and She-Ra: A Christmas Special is an hour-length Christmas television special, based on Filmation/Mattel's animated series He-Man and the Masters of the Universe and its spin-off She-Ra: Princess of Power, which is just-launched a little earlier prior to the special, originally broadcast on Christmas Day of 1985.

While everybody else is preparing for Prince Adam and Princess Adora's birthday, Prince Adam is helping Man-At-Arms finish up the Sky Spy, a space shuttle intended to spy on Skeletor. The moment they head back to the castle, though, Orko gets inside the ship and messes around with the controls, causing the ship to blast off into the sky with him in it. Skeletor catches sight of the aircraft and, despite not knowing what it is or who is flying it, he gives chase after it in the Collector. Before he can take it down, He-Man and She-Ra, who are also unaware that Orko is in it, show up and punch a hole in the Collector, throwing it off course.

Orko, meanwhile, tries to get the Sky Spy to land by way of a magic spell, which causes it to disappear from Eternia's atmosphere and crash land somewhere on Earth. Immediately following this, he meets two children named Miguel and Alisha, who had gone out to get their family's Christmas tree and become lost in doing so. He brings them into the crashed Sky Spy, where they explain Christmas to him.

Back on Eternia, everyone discovers that Orko is missing when they find his magic spellbook, which he supposedly is never without. Man-At-Arms manages to pull up the coordinates for the Sky Spy's location, which Queen Marlena recognizes as Earth's coordinates. Unfortunately, Man-At-Arms' Transport Beam needs a Carium Water Crystal, of which there are none on Eternia, in order to gain enough power to bring Orko back. Princess Adora suggests that there might be one on her home planet, Etheria, and, after secretly transforming into She-Ra, rides off on Swift Wind.

Once on Etheria, She-Ra enlists the help of Mermista to attain the crystal, which is guarded by a fierce creature known as the Beast Monster. They manage to secure it in their possession, but just as She-Ra and Swift Wind prepare to leave, they are halted by a group of huge android menaces who trap them in a plastic bubble. She-Ra recognizes these robots as the Monstroids (a parody of Transformers), having been told about them by her friends, the Manchines. They then leave for their headquarters, leaving She-Ra and Swift Wind to escape.

Upon Princess Adora's return with the crystal, Man-At-Arms gets the Transport Beam working, and sure enough, Orko and the Sky Spy are transported back in, but he has brought Miguel, Alisha, and their Christmas tree with them. After explanations of where they came from, the children are told that it may take a few days for the crystal to recharge before they can return to Earth, and they are quite distressed that they might miss Christmas. Queen Marlena, sympathizing with these children from her own planet, decides to combine Prince Adam and Princess Adora's birthday party into a Christmas party. Meanwhile, Skeletor and Hordak are summoned by their supreme master, Horde Prime, who believes that the Christmas spirit that is now being brought to Eternia is the only thing that could possibly stop his rise to power. He orders them to go capture the children, saying that whoever brings them to him will be well rewarded.

Soon, just as Bow finishes writing a song he wrote about Christmas, Hordak shows up and uses a tractor beam to capture Miguel and Alisha, taking Orko with them. He and his minions do not get far, though, before their ship is brought down by the Monstroids, who take the children hostage themselves. They plan on dealing with Horde Prime when he comes for the children, and force Hordak and his men to retreat. Luckily, the Manchines show up to rescue Orko and the children. The Monstroids try to stop them from escaping, but He-Man and She-Ra, having been told of the children's location by Peekablue, show up just in time to handle them, with help from the other Manchines. But while that's going on, Skeletor comes in and captures Miguel and Alisha, taking with them a Manchine puppy named Relay.

But then, Hordak reappears and shoots down Skeletor's sky scooter, crash landing him in some snowy mountains; because of this, Skeletor is now forced to bring his prisoners to Horde Prime on foot. During the trek, he finds a sudden urge of kindness that results in him fitting them with winter jackets to protect them from the cold, bringing Relay along so he doesn't freeze to death, and even protecting them from a snowbeast. He also inquires them about Christmas, all the while trying to reassure them, and himself, that he is still a bad guy. Just as Horde Prime arrives in his ship, He-Man and She-Ra finally catch up, but Hordak arrives as well; he knocks Skeletor out by deflecting a laser blast and distracts He-Man and She-Ra by sending out numerous Horde Troopers. But just in the nick of time, Relay licks Skeletor's face; he wakes up and saves his would-be captives by shooting down Horde Prime's ship. Obviously angry at this, Horde Prime attempts to shoot Skeletor, but He-Man and She-Ra lift his ship up and throw it into space before he has a chance to. The children thank Skeletor for saving them, a fact that He-Man is surprised at, which he reluctantly admits is true, and Skeletor is relieved to learn that he will only be overtaken by the Christmas spirit once a year.

Back at the castle, as the good guys celebrate their Christmas party, Prince Adam, dressed as Santa Claus, gives the children flying belts. Man-At-Arms then uses the Transporter to send them back to their home, where they are welcomed back by their parents.

At the end of the special, Prince Adam and Orko give us a very special Christmas moral. Adam states that "Though we celebrate it and get presents, Christmas is about caring, sharing, and goodwill and its spirit is within all of us". And in fun fashion, Orko states that what make him happy about Christmas is...presents.

The special was made available on home video for the first time on a VHS tape released by United American Video in 1989. It was released on DVD for the first time by BCI Eclipse (a subsidiary of Navarre Corporation) on December 6, 2005. The DVD contained several bonus features, including two half-hour documentaries about the special and the characters. After BCI Eclipse was shut down in 2008, another DVD of the special was released by Vivendi Entertainment on October 12, 2010; unfortunately, this DVD contained none of the bonus features from the previous DVD release. Its next release will be on a bonus DVD disc that will be included with Universal Pictures Home Entertainment's Complete Series sets for both shows, to be released on October 1, 2019. 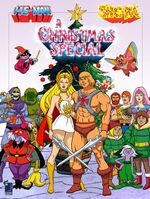 Retrieved from "https://christmas-specials.fandom.com/wiki/He-Man_and_She-Ra:_A_Christmas_Special?oldid=163393"
Community content is available under CC-BY-SA unless otherwise noted.