VHS
DVD
"Holiday Hi-Jynx" (ルージュラのクリスマス, Rougela's Christmas?) is a special episode of the Japanese anime metaseries Pokémon. The special originally aired in Japan on October 5, 1998 (after a postponement from the intended date of December 23, 1997, due to the infamous Porygon incident), on TV Tokyo. Its English-dubbed version premiered in the United States on December 11, 1999, on Kids' WB!

NOTE: The recap comes from Pokémon-centered pojo.com. In addition, the character's Japanese names are listed in parenthesis.

At the start of this episode, Team Rocket (romanized as "Rocket Dan", in Hepburn as "Roketto Dan"; translated as "The Rocket Gang") have hatched a ridiculous plan to try and capture Santa Claus. This is because Jessie (Musashi) is convinced that Santa Claus is actually a Jynx (Rougela), and a thief, and tests this out by having her partner James (Kojiro) dressed as Santa as the bait. A flashback is shown where we see little Jessie waiting for Santa, but a Jynx appears from the chimney instead, picks up one of Jessie's dolls from the floor, and departs.

At this time Ash, Misty and Brock (Satoshi, Kasumi and Takeshi) are at the beach and spot a Jynx, which is carrying around a boot. Ash wants to try and capture it, but Pikachu is down for the count after receiving a Lovely Kiss from Jynx. Ash sends out his Charmander (Hitokage) to weaken Jynx with a Flamethrower attack, but when he throws a Poké Ball, Jynx deflects it by using its psychic powers to move the boot in the way. Misty thinks the boot may belong to the Jinx's trainer, so Ash decides to stop trying to catch it just in case. Jynx hands the boot to the group, and they see a picture of Santa Claus in the boot. To explain further, Jynx establishes a psychic link with Ash, Misty, Brock, Pikachu and Charmander. They are shown that Jynx was polishing the boot at the North Pole when the piece of the ice floe she was sitting on broke off and she drifted away from Santa's workshop. Ash tells Jynx they will be happy to take her back to the North Pole. Unbeknownst to the kids, Jessie and James, along with their talking Meowth (Nyasu), see them with the Jynx and figure they must be on their way to the North Pole.

On a raft, Ash plans to reach the North Pole, but the water Pokémon pulling the raft quickly grow tired. Ash takes over, but of course he gets tired of swimming more quickly than the Pokémon did. Then he hears a voice in his head... it's a Lapras (Laplace) who is able to communicate with people telepathically. She tells Ash and his friends that Santa Claus sent her to search for one of his missing Jynx, and offers to take them the rest of the way to the North Pole.

When they're almost there, they are intercepted by Team Rocket, who have been following them in their Gyarados submarine. They fire a rocket, which releases a net, trapping Ash, Misty, Brock, Pikachu and Lapras. Still believing the Jynx is Santa Claus, Jessie, James and Meowth grab the Jynx and proceed to Santa's Workshop to steal all the presents for themselves. When they get there, they see many more Jynx... and the real Santa Claus. They grab him just as Ash and his friends enter the Workshop. Threatening to hurt Santa Claus if they don't cooperate, Team Rocket has all the Jynx load up all the presents into their sub.

When Santa asks why they're doing this, Jessie explains what happened ten years ago. The Jynx probes Jessie's mind and, remembering the event, returns Jessie's doll to her. Since it was broken, the Jynx took it back to Santa Claus to have it repaired. But since Santa Claus can only bring presents to those who believe in him, and Jessie stopped believing in Santa when she saw the Jynx take her doll, he couldn't return it to her afterwards. Jessie is grateful... but not grateful enough to return the presents! Team Rocket tries to leave, but Lapras stops them with an Ice Beam. But Ash foolishly defrosts Team Rocket by having Charmander do a Fire Spin. James's Weezing (Matadogas) makes a brief appearance to spit Sludge in Charmander's eyes, and returns to the submerging sub. But Santa's Jynx use their psychic powers to lift the sub into the air and bring it back to have it float above the ice. After retrieving all the presents, they blow up the sub, sending Team Rocket into orbit once again.

Ash, Misty, Brock and Pikachu get their presents and Santa Claus leaves to do his thing... and yes, he even visits Team Rocket (but it's not shown what they get as Jynx puts them to sleep with a Lovely Kiss).

In the United States, the episode made its home video debut on The Po-ké-Corral VHS and DVD, which was released by Viz Media through Pioneer Entertainment on September 19, 2000, and also included the episodes "Snow Way Out!" and "Showdown at the Po-ké Corral". The episode was later included on the Pokémon: Indigo League - Part 3 DVD set, released on February 12, 2008, but was dropped from the set's 2014 re-release.

In the U.S., the episode was pulled after a commentary written in a syndicated newspaper article by Carole Boston Weatherford shortly afterward, citing that Jynx offended African-Americans because of its color and looked like a performer in blackface. Since then, the episode was not re-aired on Kids' WB! or on Cartoon Network in the United States, but, as mentioned above, it was made available on VHS and DVD prior to 2014. Also, Ken Sugimori, the art director for Pokémon worldwide, had the color of Jynx's face changed to purple from black. When the episode was re-aired in Japan as an episode of Pokémon Smash! on December 23, 2012, it was edited to feature the redesigned Jynx. In the original Japanese version as well, this redesigned version of Jynx was used on the Amazon Video Prime and Netflix releases of the episode. 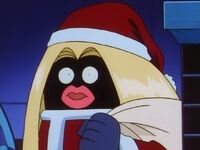 The Jynx in Jessie's flashback. 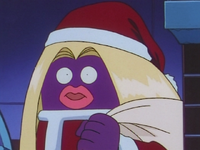 The same shot as it appeared in the 2012 Pokémon Smash! broadcast. 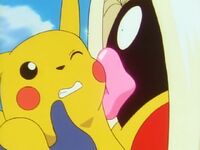 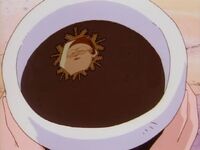 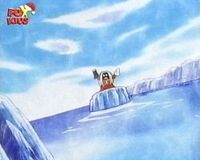 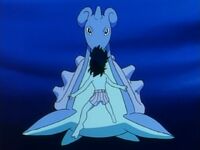 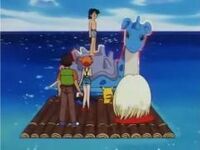 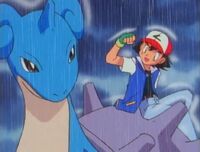 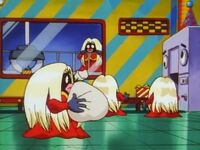 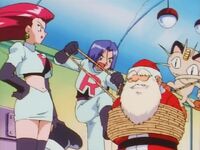 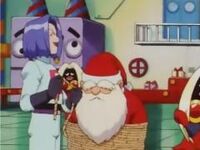 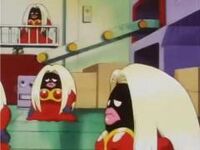 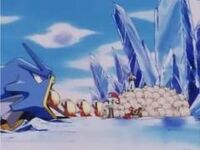 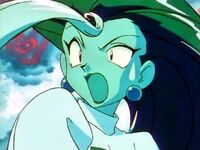 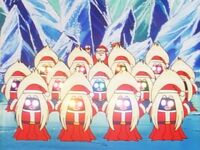 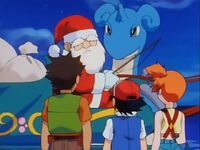 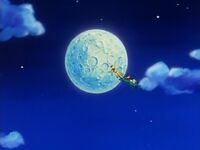 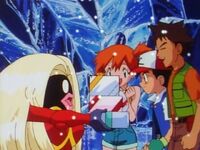 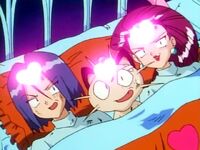 Retrieved from "https://christmas-specials.fandom.com/wiki/Holiday_Hi-Jynx?oldid=172958"
Community content is available under CC-BY-SA unless otherwise noted.