It's Princess Sofia's first Wassailia (the series' equivalent of Christmas) at the castle and the moment she wakes up and sees it snowing outside she immediately gets into the spirit. Amber looks forward to opening presents and so does James.

Meanwhile Roland and Baileywick are out on "Royal business" which is in fact getting last minute surprises for the kids. However on the way back to the castle, they lose their horses and their coach crashes in the middle of a snowstorm. They meet a woodsman who offers to give them shelter at his cottage.

Back at the castle the Sofia and the family are starting to get worried about Roland. So they decide to go out and find him with the help of Minimus since all the other royal horses are sick with colds.

As they fly across the forest, the snowstorm starts to get worse and they are forced to land. Lost and worried, Sofia's Amulet summons Disney Princess Aurora who tells her she can count on the animals of the forest. Clover, Mia and Robin had stowed away in the coach to help Sofia find Roland. Mia and Robin fly around the forest asking all the animals to help find him and they do when they bring back the royal flag to Miranda.

They follow a white owl to the cottage where Roland is and the royal family is reunited and celebrate Wassilia with the Woodsman's family. 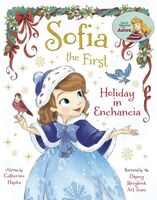 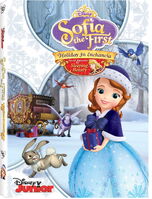 The cover to the DVD release.
Add a photo to this gallery

Retrieved from "https://christmas-specials.fandom.com/wiki/Holiday_in_Enchancia?oldid=137065"
Community content is available under CC-BY-SA unless otherwise noted.