A year after the events in the previous film, the McCallisters prepare to spend Christmas in Miami. Kevin, Peter and Kate's youngest son, finds that "there's no Christmas trees" there but palm trees instead, which bugs him. At the school's Christmas pageant concert, Kevin's oldest brother, Buzz, humiliates him during his solo, causing him to punch Buzz in the stomach, which knocks over the other children and sends one of the cardboard Christmas trees crashing down onto the pianist. Later, Buzz apologizes to Kevin and the rest of the family, but Kevin refuses to do so, and does not want to accept Buzz's apologies, and also reiterates his disgust with their decision to go to Miami before he storms up to the third floor bedroom, wishing that he had his own money so he could go on his own vacation by himself. When Kate reminds him that he got his wish the year before and that maybe he'll get it again this year, he replies, "I hope so!"

The McCallisters accidentally oversleep on the day of the flight due to Peter accidentally resetting the clock radio. They hastily depart to O'Hare International Airport for the flight to Miami. While Kevin changes the batteries in his Talkboy, he follows a man wearing the same color overcoat as Peter toward a flight to New York City. Once in Miami, the McCallisters realize that he isn't there again and Kate faints after Peter shouts in disbelief "What?!" and the truth of the matter sinks into her mind herself.

In New York City, Kevin gets surprised by the appearance of a lady tending to pigeons before checking into the Plaza Hotel, which he had heard mentioned on a game show the night before, using Peter's credit card from his wallet and his Talkboy to make him sound like Peter. He passes by Donald Trump, then-owner of the hotel, who tells him the lobby is "down the hall and to the left." While there, he tours the city and visits Duncan's Toy Chest, where he meets the philanthropist owner, Mr. Duncan, who tells him that the proceeds from the Christmas sales will go to the Children's Hospital. After donating some money, Mr. Duncan allows him to take a pair of ceramic turtle doves as a gift from the store's Christmas tree before instructing him to give one to another person for friendship. Before returning to the hotel, though, he runs into Marv and Harry, who have escaped from a prison in Chicago in a fish truck during a prison riot to continue their robberies in New York City, changing their name from the "Wet Bandits" to the "Sticky Bandits". However, Mr. Hector, Cedric, the receptionist, and two security guards confront him about the stolen credit card. He hides in another room and uses a gangster movie he watched the night before to trick them into making them think that an insane guest with a gun is in the room. He escapes, but runs into Marv and Harry once again; Marv takes his return ticket to Chicago, noting that it's for a round trip to Miami, and knows that he got on the wrong plane. Harry rips it up so that he can't get back home or to Miami. They tell him that they escaped from prison and, where he uses his Talkboy to record, about their plans of breaking into Duncan's Toy Chest that night, before he flees by hiding in the back of a hansom cab.

When Kevin walks by the Children's Hospital, he sees a sick child in a window, who waves to him, and he returns it with a look of compassion. After remembering what Mr. Duncan and Marv had told him, he remarks that a person can mess with a lot of things, but not with kids on Christmas. With that, he returns to Uncle Rob's house to prepare a series of booby traps throughout it.

Kevin arrives at Duncan's Toy Chest during the theft and photographs Marv and Harry before he shatters the store's window and sets off the burglar alarm by throwing a brick tied with a note to Mr. Duncan through it. They chase him and spring every booby trap in Uncle Rob's house as he dials 911 from a phone booth. They trap him when he slips on a patch of ice and take him to Central Park, where they decide to kill him. When the pigeon lady discovers them, Harry tries to shoot her, but his pistol is full of varnish and won't fire. She throws a bucket of birdseed on them which causes the pigeons to attack them while Kevin escapes. Shortly after, he sets off some Chinese fireworks he bought earlier to signal the NYPD. Marv and Harry are arrested and the stolen money is recovered; furthermore, the police also have Kevin's photos and cassette tape to use as evidence against them, and Marv digs himself and Harry deeper into admitting their guilt by stupidly telling the police they recently broke out of prison and hid out in Duncan's Toy Chest until after closing time in order to rob it, much to Harry's increasing anger and frustration as he tries to get Marv to shut up on the matter. At Duncan's Toy Chest, Mr. Duncan finds Kevin's note and realizes his role in stopping the theft.

A truckload of gifts from Duncan's Toy Chest comes to the hotel on Christmas Day as a reward for Kevin's foiling of the theft, and Buzz suggests that had it not been for him getting on the wrong plane, they would not be in the suite with the Christmas tree and gifts in the first place. So, he decides to let him open the first gift as a sign of reconciliation. While everyone else is opening theirs, Kevin runs out to give the pigeon lady one of the two turtle doves that Mr. Duncan gave him and reaffirms his promise. Meanwhile, Buzz receives his room service bill from his original stay, a service charge of $967.43. He shows it to Peter, who becomes outraged and suddenly shouts out, "Kevin! You spent $967 on room service?!" Kevin, now dreading what's to come, immediately runs back to the hotel as it fades to black.

For the film's tenth anniversary, Varèse Sarabande released a two-disc special edition soundtrack, containing the previously noted cues along with additional compositions that were left out from the final film.[2] 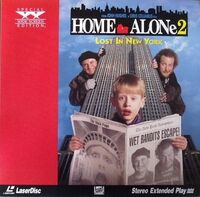 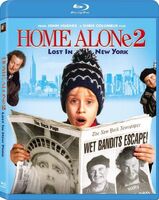 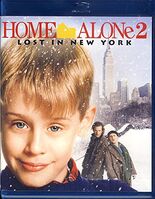 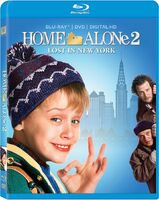 Retrieved from "https://christmas-specials.fandom.com/wiki/Home_Alone_2:_Lost_in_New_York?oldid=191416"
Community content is available under CC-BY-SA unless otherwise noted.