Two years after the events in the previous film, the McCallister family prepares to spend Christmas in Miami. Kevin McCallister, Peter and Kate's youngest son, finds that "there's no Christmas trees" there but there are Palm trees there, which bugs him.

Later, Buzz apologizes to Kevin and the rest of the family, but Kevin refuses to apologize and also reiterates his disgust with the family's decision to go to Miami before he storms up to the third floor bedroom of the house, wishing that he had his own money so he could go on his own vacation by himself. When Kate reminds him that he got his wish the year before and that maybe he will get it again this time, he replies, "I hope so!"

Kevin gets scared by the appearance of a lady who is tending to pigeons before checking into the Plaza Hotel, which he had heard mentioned on a game show the night before, using Peter's credit card from his wallet. While there, he tours the city and visits Duncan's Toy Chest, where he meets the philanthropist owner, Mr. Duncan. He is told that the proceeds from the Christmas sales will go to the Children's Hospital. After donating some money, Mr. Duncan allows him to take a pair of ceramic turtle doves as a gift from the store's Christmas tree before instructing him to give one to another person for friendship. He runs into Harry Lyme and Marv Merchants, who have escaped from prison in Chicago to continue their robberies in New York City by changing their name from the "Wet Bandits" to the "Sticky Bandits", before returning to the Plaza. However, Mr. Hector, the hotel's concierge, confronts him about the credit card. He escapes, but runs into the bandits once again, Marv took his ticket and notes that Kevin is on a round trip to Miami and told him that if he got an the wrong plane and Harry rips his ticket so that way Kevin can't get back home or get to Miami with his family. They told him that they escape from prison and where he uses his Talkboy to record their plans of robbing Duncan's Toy Chest that night before he flees by hiding in the back of a hansom cab.

While in a one-room motel in Miami, the McCallisters discover that Kevin has been found using Peter's credit card and is on the run. The family manages to fly to New York City and once at the Plaza, they confront the staff for letting him check into the hotel alone and letting him escape. Kate decides to find him against the advice of Peter and the staff, while Mr. Hector gives the family a complimentary suite. Before she leaves, Kate slaps Mr. Hector for causing Kevin to escape.

Kevin discovers a house belonging to his Uncle Rob being renovated. While in Central Park, he runs into the pigeon lady, only to get his foot caught in between some rocks. After she frees him, they watch a Christmas concert in a loft above Carnegie Hall. He discovers how her life has fallen apart and how she dealt with it by taking care of the pigeons in the park and he promises to be her friend. He returns to Uncle Rob's house to prepare a series of booby traps throughout it.

Meanwhile, Kate is looking for Kevin in Times Square, and comes across two police officers. She remembers his fondness for Christmas trees and asks them to take her to Rockefeller Center, finding him in front of the the tree. While there, the two reunite and reconcile as they return to the hotel while Kate tells Kevin that the family didn't like the Palm trees and having Christmas in Florida.

A truckload of gifts from the toy store comes to the Plaza on Christmas Day as a reward for Kevin's foiling of the robbery, and Buzz suggests that had it not been for Kevin getting on the wrong flight, they would not be in this suite with the Christmas tree and gifts in the first place. So, he decides to allow Kevin to open up the first present as a sign of reconciliation. While everyone else is opening their presents, he runs out to give the pigeon lady one of the two turtle doves Mr. Duncan gave him and reaffirms his promise. Meanwhile, Buzz receives Kevin's room service bill from his original stay, a service charge of $967.43, and gives it to Peter. Peter becomes outraged and shouts out, "Kevin! You spent $967 on room service?!" Kevin immediately runs back to the hotel and the film ends. 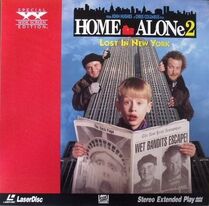 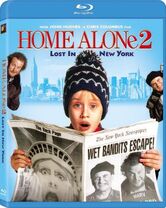 Retrieved from "https://christmas-specials.fandom.com/wiki/Home_Alone_2:_Lost_in_New_York?oldid=77614"
Community content is available under CC-BY-SA unless otherwise noted.