As the family is securing the mansion against Santa Claus, with whom Scrooge is embroiled in a long-term feud, Santa approaches them with a broken leg and requests Scrooge's help. Scrooge agrees, provided that Santa never bothers him again. While helping them deliver presents, Webby discovers the truth behind Scrooge's grudge: he and Santa invented the tradition of bestowing gifts on Christmas, but had a falling out when Scrooge refused to do so for free. As they finish delivering the presents, Webby and Santa learn Scrooge has actually been giving everyone coal and confront him. Santa confesses that he was never injured and that his goal was to have Scrooge embrace the magic of Christmas, while Scrooge admits he was wrong about the holiday. The two then reconcile and Scrooge calls in the rest of the family to deliver the real presents before sunrise. 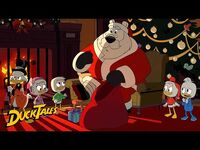 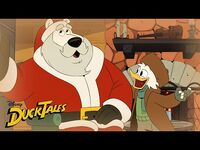 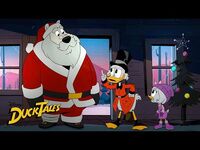