This article is about the 1966 animated special. For the 2000 live-action film, see How the Grinch Stole Christmas (movie).

Dr. Seuss' How the Grinch Stole Christmas! is an animated television special based on the book of the same title by Theodor Geisel (better known as Dr. Seuss), directed by legendary cartoon director Chuck Jones. It features narration by Boris Karloff (who also voiced the title character) and music written by Albert Hague.

It's Christmas Eve in Whoville, and everyone is decorating for the big day tomorrow -- everyone but the Grinch, a sour, depressed hermit who lives on nearby Mount Crumpit. The Grinch absolutely hates everything about Christmas because of the noise surrounding the entire town on Christmas Day. The Grinch tries to come up with a plan to "keep Christmas from coming". Just then, he notices his dog, Max, covered in snow in a way that makes him look like Santa Claus and gets the notion of disguising himself as Santa and stealing all of the Whos' presents, believing that is enough to stop the holiday from coming. First, he cuts out a coat and a hat and sews some fluff onto them. Next, he takes a reindeer horn and ties it to Max. Finally, the Grinch brings out a big stack of bags, loads it onto the sled, and starts down on his journey to Whoville in a very comical way.

In Whoville, the Grinch starts to steal everything in the first house. While stuffing their tree up the chimney, though, Cindy Lou Who wakes up and asks him why he's taking the Christmas tree. The Grinch fibs his way out of it by telling her that one of the lights is broken and he's taking it to his workshop to fix. After tucking Cindy Lou back in bed, the Grinch stuffs up the tree, and goes up the chimney himself, taking the log for their fire. He does the same thing for every house afterwards.

Loaded with everything the Whos owned, the Grinch and Max takes up the presents to Mt. Crumpit. Feeling joyous at the moment, the Grinch prepares to listen for a sad cry from the Whos. Instead, the Whos are still happy and singing carols. It is at this point that the Grinch realizes the true meaning of Christmas and has a change of heart. The Grinch barely retrieves the sled from falling over the edge of the mountain. He brings everything back to the Whos and is invited to participate in the holiday feast.

The special was originally broadcast on CBS on December 18, 1966. CBS repeated it annually during the Christmas season until 1987. Afterward, it, along with the rest of MGM's pre-1986 film library, was acquired by Turner Broadcasting System. Turner Broadcasting now shows the special several times between November and January. It has since been broadcast on TBS, TNT, Cartoon Network, and The WB, as well as on ABC, but with several scenes cut out or shortened.

How the Grinch Stole Christmas! was first released to VHS, Betamax, CED, and Laserdisc by MGM/UA Video in the early 1980s. They released it on VHS again in 1986 and 1994. MGM/UA Video released it on Laserdisc again in 1994, and then on DVD in 1996; on most of these releases, it was accompanied by another animated special based on one of Dr. Seuss' books, Horton Hears a Who!

After Warner Bros. bought Turner Entertainment in 1996, they released a new VHS release of How the Grinch Stole Christmas!, again accompanied by Horton Hears a Who!, in 1999. A year later, this was followed up with Warner Home Video's first DVD release of the special. In addition to Horton Hears a Who! as a bonus special, the DVD also contained an audio commentary by Phil Roman and June Foray, a small gallery of the special's original pencil sketches, and the special's making-of documentary (originally broadcast on TNT in 1994).

Warner Home Video later released a new DVD of the special in 2006 for the 40th anniversary of the special's original airing (and an early tie-in with the 50th anniversary of the book's original publication). This DVD release presented the special in improved picture quality and contained most of the previous DVD's bonus features as well as a new featurette about the special's origins, but oddly dropped the audio commentary. Three years later, Warner Home Video quietly issued a similar DVD release, this time reinstating the audio commentary and dropping the inclusion of Horton Hears a Who! (which had gotten its own DVD release as a tie-in with the book's 2008 film adaptation). A Blu-ray of the 2009 release was also released around the same time. Warner Home Video released the 2009 DVD again in 2011, this time as part of a 2-disc set titled Dr. Seuss' Holidays on the Loose!, with the second disc containing the later two TV specials starring the Grinch - Halloween is Grinch Night! and The Grinch Grinches the Cat in the Hat. The 2009 DVD was released again as part of the Dr. Seuss's Deluxe Holiday Collection DVD set (which also contained Warner's DVD releases of Horton Hears a Who! and The Lorax) on October 2, 2012. 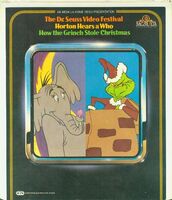 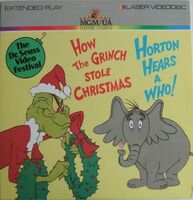 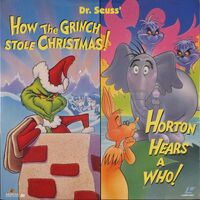 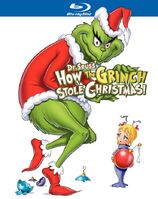 Dr. Seuss' Holidays on the Loose! DVD
Warner Home Video, 2011
Add a photo to this gallery

A soundtrack album was released on Leo Records (a subsidiary of MGM Records) in 1966. It was available in mono (LE-901) and stereo (LES-901), and featured the complete soundtrack of the special. After being out of print for many years, it was finally reissued on CD and cassette in 1995 on Mercury Nashville 528 439, and was also available as a limited edition picture disc record. A 45 RPM single was also released in 1995 of Thurl Ravenscroft singing "You're a Mean One, Mr. Grinch".

At the time of the special's 1999 VHS release, the score to the special and Horton Hears a Who were released on CD. The audio tracks from this CD have since been made available on iTunes.

Retrieved from "https://christmas-specials.fandom.com/wiki/How_the_Grinch_Stole_Christmas!_(1966)?oldid=45970"
Community content is available under CC-BY-SA unless otherwise noted.