Dr. Seuss' How the Grinch Stole Christmas is a 2000 comedy film from Universal Pictures and Imagine Entertainment, in association with and copyrighted by LUNI Productions GmbH and Company KG, based on Dr. Seuss' 1957 storybook of the same name. Directed by Ron Howard and produced by Howard and Brian Grazer, it is the first theatrical film based on a Dr. Seuss story. DreamWorks was originally planning to co-produce the film, but dropped out at the last minute. However, DreamWorks would internationally distribute another Universal/Imagine Dr. Seuss adaptation, 2003's The Cat in the Hat.

Because the film is based on a children's storybook, many additions had to be made to the storyline to bring it up to feature-length, including some information about the backstory of the title character. Most of the rhymes used in the book were used in the film, though some were slightly changed, and new rhymes were put in as well. Anthony Hopkins supplied narration similar to Boris Karloff's from the 1966 version, and the soundtrack included a new version of the original special's song "You're a Mean One, Mr. Grinch".

The advance publicity title for the film was simply The Grinch, which was used for the worldwide theatrical run and was retained for Australian and United Kingdom releases.

The movie begins with a celebration in the whimsical city of Whoville, where everyone celebrates Christmas with much happiness and joy, with the exception of the cynical and misanthropic Grinch, who despises Christmas and the Whos with great wrath and occasionally pulls dangerous and harmful pranks on them for his own satisfaction and enjoyment. As a result, no one likes or cares for him.

Cindy Lou Who, a 6-year-old Who, becomes aware of the Grinch's existence, and after being saved from a deadly machine by him in the Whoville Post Office, suspects that he isn't as bad as he seems and becomes interested in the Grinch and his history. She asks everyone what they know about him and soon discovers that he has a tragic past: The Grinch actually arrived in Whoville by mistake when he was a baby, and was adopted by a pair of ladies. Although he showed some sadistic tendencies as a child, he was not the cruel, selfish person he would become; he was bullied by his classmates (mostly by Augustus May Who, the current Mayor of Whoville) because of his green and hairy appearance, with the exception of Martha May Whovier, who showed some romantic interest in him. One Christmas season, he made a gift for Martha May, but attempted to shave his face after recalling Augustus' insults about it, cutting himself and resulting in his classmates laughing at him and humiliating him. He snapped, lost his temper and went on a rampage against Christmas before running away to live on Mt. Crumpit, leading to his current hatred of the Whos during Christmastime.

Cindy decides to make the Grinch the main participant of the party before Christmas, to the great displeasure of Augustus, who has no choice but to agree to the idea. But when she offers an invitation to the Grinch, he only grumbles and sends her out of his cave; however, after much gossip and debate with himself, he changes his mind (with a "little help" from Max, his dog) and goes to the party anyway. While he is initially disgusted with the party, he starts to genuinely enjoy himself, until Augustus proposes marriage to Martha and gives the Grinch an electric shaver as a Christmas present — which makes him recall his traumatic childhood and go on a rampage again to cause chaos and mischief, spoiling the party and upsetting Cindy Lou. The Grinch is pleased with his rampage, but to his dismay, he finds that his attack has not removed the spirit of Christmas from the Whos, and that they will do the commemoration of Christmas tomorrow anyway.

Angry with the idea of spending another annoying Christmas in his cave, the Grinch deduces that the Whos only celebrate Christmas because of their extravagant gifts, and he (with the unintended help of Max) decides to steal all their belongings while they sleep. He does this successfully after spending the day building his sleigh before night falls, but ends up forcing Max to pull all the stolen things when his flying sleigh breaks down from running out of fuel.

The next morning, when the Whos wake up and notice that they were robbed, Augustus gets mad and openly accuses Cindy Lou of ruining Christmas by inviting the Grinch to the party earlier. But her father, Whoville Postmaster Lou Lou Who, openly steps up and defends her, saying that she did nothing wrong; he then explains to the Whos that they still have the Christmas Spirit — the one thing that doesn’t come from a store — and that the principal meaning of Christmas is to spend it with family and friends, not to give or receive gifts and do decorations. The Whos agree with this remark and begin to sing.

Meanwhile, the Grinch, unaware of what happened in the town, believes that he has destroyed Christmas and decides to destroy all the stolen gifts after he hears the Whos crying, but to his shock, he actually hears the joyful singing of the Whos and realizes that his plan backfired. Disgusted and puzzled, the Grinch asks why his plan failed and, after a moment of reflection, realizes that Christmas means much more than mere material gifts — an insight that profoundly touched him and (literally) makes his heart grow up three times its original size. Just then, gravity starts pulling the stolen gifts to the edge of the cliff, and a horrified Grinch tries to save it. The gifts are too heavy to him and he considers letting them go, but then Cindy (who decided to give him another chance) appears on the top of the gifts, telling him that she came to see him because "nobody should be alone on Christmas." Touched by her kind words, the Grinch gains enough strength to lift the gifts and save both them and her from going over the cliff.

After a long descent, the Grinch, along with Cindy, brings the gifts back to Whoville. He apologizes for his past deeds against the Whos and offers to accept any punishment that they want to give him, turning himself in to Police Chief Wholihan. But to Augustus's chagrin, Wholihan pardons the Grinch since he returned everything and apologized, while Martha rejects Augustus's marriage proposal and wants to stay with the Grinch. In the end, the redeemed Grinch starts a new life with the Whos and commemorates Christmas with them in his cave. 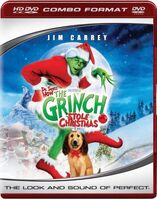 HD-DVD/DVD Combo
Universal Studios Home Entertainment
2006
DVD is a reprint of the 2001 DVD. 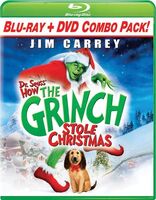 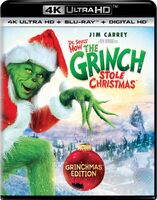 DVD
Universal Studios Home Video
October 8, 2019
Reprint of 2001 DVD; paired with The Cat in the Hat.
Add a photo to this gallery

The film received mixed to positive reviews from critics. Rotten Tomatoes lists the film with a 53% rating, classifying it as "Rotten", and Metacritic listed the film with a 46% rating, indicating "mixed or average reviews".

The film garnered three Academy Award nominations, including Best Costume Design and Best Art Direction, and won the Academy Award for Best Makeup, as well as a Saturn Award for Best Music. At the Golden Globes, Carrey was nominated for the Golden Globe Award for Best Actor – Motion Picture Musical or Comedy, losing the award to George Clooney for O Brother, Where Art Thou? However, the movie was also nominated for two Golden Raspberry Awards, Worst Remake or Sequel and Worst Screenplay, losing both categories to Book of Shadows: Blair Witch 2 and Battlefield Earth, respectively.

Retrieved from "https://christmas-specials.fandom.com/wiki/How_the_Grinch_Stole_Christmas_(2000)?oldid=159212"
Community content is available under CC-BY-SA unless otherwise noted.