A few days before Christmas Eve, Jake Wilkinson's dad offers to give him a vintage 1957 Porsche if he is home in by 6pm on Christmas Eve (when his family has Christmas dinner) in New York. He prepares to go; however, a group of bullies leave him stranded in the middle of the desert dressed in a Santa Claus suit. They do this as punishment for not getting an exam cheat sheet from him, not knowing that it was their leader, Eddie Taffet, who prevented it, to get him out of the way and claim his girlfriend, Allie Henderson, for himself. While he is stuck in the desert, Eddie is giving Allie a ride to New York. Now, Jake has only three days to make it to Larchmont, New York if he wants both her and the car.

Jake stumbles upon a few obstacles such as a man named Nolan who is driving kitchen goods to his dealer near New York so he hitches a ride with him, unbeknown to him that he is a thief. A police officer named Max pulls them over for speeding and becomes suspicious of them, so Jake lies and says that Nolan is his elf and they are donating the goods to the children's hospital. Max offers them to follow him since he is heading in the same direction. At the hospital the children remind Jake, Nolan, and Max about the importance of family, and Nolan decides to win back his girlfriend, Marjorie, who is headed in the opposite direction. Max buys Jake a bus ticket to New York.

Meanwhile, Allie and Eddie are heading for New York and decide to stay at a pretend village hotel and are caught kissing under some mistletoe on camera by Jake. Hesitant to speed the bus up, he uses a cooler and a week-old meat sandwich saying that it is a liver one for a little girl at the hospital. He finds the village and Allie and Eddie's room; he sees him walk out of the shower in a towel and assumes that he had slept with her (he didn't, she made him sleep in a sleeping bag). She and Jake eventually make up but he blurts out that Eddie prevented him from getting his dad's car. Upset that he had come there to get the car and not herself (which he actually did), she takes his seat on the bus and leaves.

Jake and Eddie drive off. He tells him that he will go home, win back Allie, and get the car. Eddie, jealous that Jake will get Allie, throws him out but is soon arrested. Jake decides to enter a Santa Claus race to win a $1,000 prize so he can buy a plane ticket to New York. He meets a nice man whom he beats and wins the prize, but on his way to the airport he learns that the man is actually the mayor who uses the prize money to buy turkeys for the needy. Jake reluctantly gives it to the him and calls home. His sister arranges for a plane ticket for him but he is not granted it since he has no identification, so he decides to stow away in a dog kennel in a cargo plane. When he reaches New York he apologizes to Allie, purposely waits in front of his house so he'll get the car deal, and even refuses to take it when his dad says he's only a few minutes late. 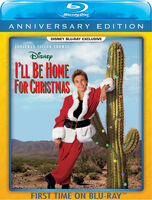