Ice Age: A Mammoth Christmas is an upcoming Christmas television special spun off from the Ice Age film series, set to premiere on FOX on Thanksgiving Day of 2011.

In the middle of decorating for the holiday season, Sid accidentally destroys Manny's favourite decorations. Sid, convinced by Manny that he is now on the Santa's naughty list, takes off with Crash, Eddie and Peaches for the North Pole to get back on the Santa's good side. When on the North Pole, Sid and his crew accidentally destroy Santa's Workshop. When Manny, Ellie and Diego worried over Peaches safety, arrive to North Pole, they must come together and save Christmas.

Two days after its television debut, it will be released on DVD and Blu-ray combo pack. 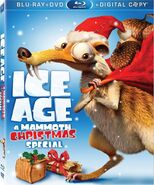 Retrieved from "https://christmas-specials.fandom.com/wiki/Ice_Age:_A_Mammoth_Christmas?oldid=28528"
Community content is available under CC-BY-SA unless otherwise noted.