Christmas Specials Wiki
Register
Don't have an account?
Sign In
Advertisement
in: Episodes, 1995 releases, Originally aired on The WB,
and 2 more

"In Arms Way" is a Christmas segment from the tenth episode of the Warner Bros. animated show Steven Spielberg presents Freakazoid! The episode featuring the segment was originally broadcast on Kids' WB! on December 16, 1995.

Freakazoid is busy trying to do his Christmas shopping, having unfortunately waited until the last minute to do so. While Freakazoid is out looking for presents for his friends and family, a nearby coffee shop receives a sudden visit from Arms Akimbo, a mobster whose arms are permanently fixed in a jaunty pose. Joe the announcer tells Akimbo's origin to the viewers, explaining that he was raised by his parents to be a print model, and after years of posing that left his arms frozen in their position, he turned to a life of crime. Akimbo tells the coffee shop's clerk that he is here to sell "Oops Insurance", and by that, he means that he will knock everything in the store to the ground unless they give him all their money.

As Akimbo goes about on his crime spree, Freakazoid visits the local mall's Santa Claus, asking what he should get for his girlfriend Steff. The mall Santa suggests he just get Steff some perfume, but Freakazoid is still not certain that is a good gift. Just then, he receives a phone call from Mike at the hot dog stand, which has just been vandalized by Akimbo. However, Freakazoid is quickly distracted by the sight of a chocolate moose, which he declares is the perfect gift for Sergeant Cosgrove.

Freakazoid then heads to Chochkey's store to continue with his shopping when he realizes he forgot about Mike's call. Before he can get going to the hot dog stand, though, he comes upon his nemesis, the Lobe, who is also doing his Christmas shopping. After the two try to figure out what they've bought for each other, Freakazoid wishes happy holidays to the Lobe and continues trying to finish his shopping. Just as Freakazoid again remembers that there's a crime he needs to stop, Arms Akimbo shows up in the store. Freakazoid remarks that they haven't crossed paths since last year's superhero/villain softball game, which briefly triggers the two to argue over whether Akimbo successfully tagged Freakazoid out during said game. Akimbo orders his henchmen to take out Freakazoid, but he dodges their attack easily. Freakazoid then spins Akimbo around square-dance-style, sending him flying into the air and falling right into a shelf full of coffee mugs.

When the police come to arrest Akimbo and his henchmen, Freakazoid asks Sergeant Cosgrove what he thinks would be the right gift for Steff. Cosgrove responds by suggesting "banjo lessons or a new turban," saying that he never uses perfume because it's for girls. Freakazoid then decides that he should just tell Steff that he himself is her Christmas present, but Cosgrove replies that he should just get her the perfume, to which Freakazoid responds "I think you're right."

The episode made its home video debut on the Freakazoid!: Season 1 DVD set, released by Warner Home Video on July 26, 2008. 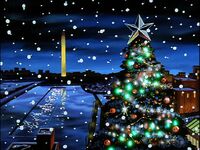 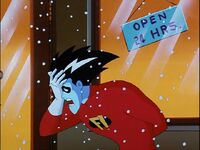 "Why do I always wait until the last minute to do my Christmas shopping?" 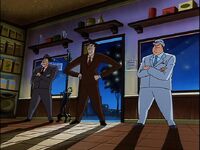 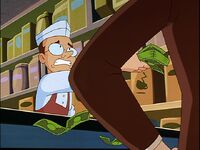 The clerk is forced to pay for Akimbo's "Oops Insurance". 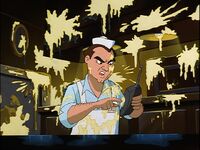 "That Arms Akimbo's gonna pay for this! I'm gonna make him sad and unhappy all at the same time!" 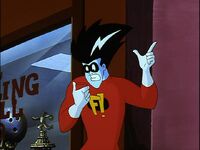 Freakazoid checks his pager, but then gets distracted by... 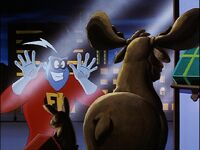 "A three-foot-tall chocolate moose with fudge eyes! Oh, Cosgrove would trade his badge for this!" 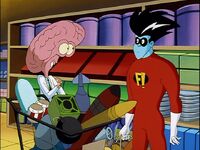 While at Chochkey's, Freakazoid runs into the Lobe. 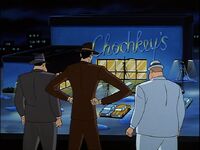 Arms and his henchmen come to Chochkey's... 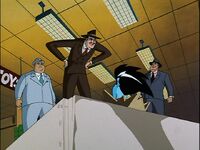 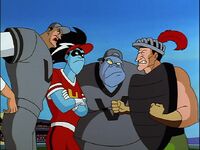 Freakazoid flashes back to the superhero/villain softball game. 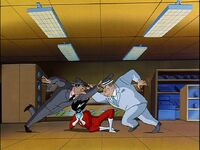 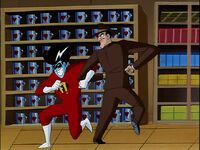 "What is this, Hee Haw? Stop it! Fight normal!" 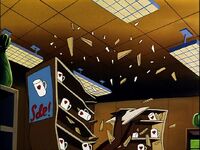 Akimbo crashes through a shelf of coffee mugs. 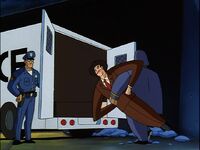 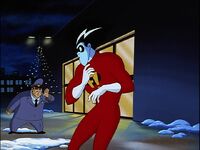 "Get her the perfume!"