1951
"It's Beginning to Look a Lot Like Christmas" is a classic Christmas song written in 1951 by Meredith Willson. It was originally titled "It's Beginning to Look Like Christmas", and has been recorded by many artists, but was a hit by Perry Como and the Fontane Sisters with Mitchell Ayres and his orchestra on September 10, 1951 and released on RCA Victor as 47-4314 (45 rpm) and 20-4314 (78 rpm). Bing Crosby recorded a version on October 1, 1951 which was also widely played.

A popular but unproven belief in Yarmouth, Nova Scotia holds that Willson wrote the song while staying in Yarmouth's Grand Hotel.[1] It makes reference to a "tree in the Grand Hotel, one in the park as well..."; the park being Frost Park, directly across the road from the Grand Hotel which still operates in Yarmouth. However, that was a popular name used by many hotels in numerous towns and cities.

The song was later incorporated into the pre-Broadway version of the score of Willson's 1963 musical Here's Love and can be heard on that show's original cast recording, where it is sung in counterpoint to a new melody and lyric, "Pinecones and Holly Berries."

In 1986, Johnny Mathis recorded the song for his album Christmas Eve with Johnny Mathis; this version gained popularity after its inclusion in the 1992 film Home Alone 2: Lost in New York. Gradually, it began to receive wide radio airplay, and for the past several years it has been a popular Christmas hit. 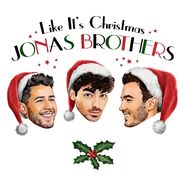 Add a photo to this gallery
Lyrics

Retrieved from "https://christmas-specials.fandom.com/wiki/It%27s_Beginning_to_Look_a_Lot_Like_Christmas?oldid=152758"
Community content is available under CC-BY-SA unless otherwise noted.