"It's a SpongeBob Christmas!" is the second Christmas episode of the Nickelodeon animated series SpongeBob SquarePants, produced as the 23rd episode of the show's eighth season. It was released as a direct-to-video special on October 30, 2012, before making its televised premieres on CBS on November 23rd[1] and on Nickelodeon on December 6th of the same year. Unlike the series' first Christmas episode, "Christmas Who?", this special was done entirely in stop-motion animation produced by Screen Novelties. A similar stop-motion Halloween episode, "The Legend of Boo-kini Bottom", followed in 2017.

The special opens on Patchy the Pirate driving a mail truck (parodying the role of S. D. Kluger from Santa Claus is Comin' to Town) through a snowy mountain area, explaining to the viewer that he wanted to make sure Santa Claus got his letter this year, so he has given the mailman the day off (or so he claims; in actuality, he has tied up the mailman and put him in the back of the truck). His parrot, Potty, however, doubts that Patchy knows the way to the North Pole. As they debate which Christmas song contains the directions in its lyrics, the truck suddenly runs over a (literal) fork in the road. As the truck starts spinning out of control, Patchy suggests they show the viewers what SpongeBob is up to this Christmas.

As the main story begins, it is once again Christmastime in Bikini Bottom, and SpongeBob is preparing for Santa Claus' arrival again. He decorates his house and then goes about asking his friends about their Christmas doings. Squidward wants Santa to leave him alone, Patrick is setting a trap for Santa so he can get him to stop the clocks and make Christmas last all year long, Sandy is trying out her Christmas Magic Analyzer, and Mr. Krabs is also decorating the Krusty Krab for Christmas. But meanwhile, at the Chum Bucket, Plankton, who always gets coal from Santa, is explaining his latest plan to his computer-wife, Karen. He has discovered an element called jerktonium, which can turn even the nicest person unbearably nasty, so he is going to give out fruitcake sprinkled with jerktonium to everyone in Bikini Bottom. Plankton figures that once everyone in the city has turned into jerks, he will be the nicest person in town by comparison and Santa will have to give him what he wants, the Krabby Patty secret formula.

After preparing his jerktonium-tainted fruitcake, Plankton goes looking for the first victim when SpongeBob shows up. Plankton gives him several fruitcakes, but to his dismay, none of them have any effect on the sponge. Thinking the plan has failed, Plankton gives SpongeBob the keys to his fruitcake dispenser, the Jerkmaker-9000, and SpongeBob goes about giving Plankton's fruitcake to everyone in town. Sure enough, the consumers are quickly turned angry and nasty by the jerktonium-laced fruitcakes. When Plankton goes to look, he is pleased to see that almost everyone in Bikini Bottom is acting like jerks. However, since SpongeBob's innocent love of the holiday's protects him from the effects of the jerktonium, Plankton decides to bring in "plan B". ToyBob, a wind-up robot in SpongeBob's likeness that will go through town framing SpongeBob for all sorts of naughty deeds.

Back in the framing device, the mail truck crashes at the bottom of a cliff, but Patchy and Potty (and the mailman, still bound and gagged) manage to survive. Unfortunately, with the truck now having a flat tire due to the fork, Patchy and Potty take a break to start a campfire. In twenty minutes, the two become so hungry that they attempt to eat each other.

As the story continues, SpongeBob, completely unaware that he has been giving everyone jerktonium, starts noticing that the citizens are acting pretty mean now, but he assumes they just have holiday jitters. The next morning, on Christmas Eve, SpongeBob sees that nobody in Bikini Bottom seems to have any feelings of goodwill and decides to investigate. Squidward won't help him, so he goes to Sandy's treedome to request her assistance, only to see that she too has become a fruitcake-eating jerk. SpongeBob then accidentally tosses a piece of the fruitcake Sandy's eating into her Christmas Magic Analyzer, and it prints out a reading that reveals to them that the fruitcake contains the jerktonium that has made everyone turn ornery. After telling Sandy he got the fruitcake from Plankton, SpongeBob worries that he's become the biggest jerk in town since Plankton fed him so much of it earlier. Sandy, however, tells him that he's actually immune to it due to his tiny brain and pure heart, but she'll need to make an antidote for everyone else, so she sets her Analyzer to calculate the formula. The analyzer then produces a piece of sheet music that turns out to be the antidote, when SpongeBob starts humming the music, Sandy suddenly returns to her normal self.

With that, SpongeBob greets everyone in Bikini Bottom by singing the song, "Don't Be a Jerk (It's Christmas)", gradually turning them all back to normal. After he finishes the song, Santa arrives, but he says that everyone is on the naughty list, he's seen everything, and that Plankton is, by comparison, the nicest one here. Santa proceeds to bring the Krabby Patty formula to Plankton, at which point Mr. Krabs asks how he got on his hands on it, with Santa replying he has his ways (actually, his elves snatched it from Krabs' pocket, and almost do the same for his wallet). SpongeBob attempts to explain the truth, but Santa will not listen, since he also thinks SpongeBob is the worst one of all. At that moment, ToyBob appears and prepares to destroy Santa. SpongeBob, however, steps in to defend the big guy and eventually destroys the robot by covering it in fruitcake shot by Plankton's Jerkmaker-9000. Santa, seeing that SpongeBob, and everyone really is or are a good person, looks at the key that was on ToyBob's backside and sees the text "If found, please return to the Chum Bucket" written on it. Plankton tries to escape, but Krabs grabs the formula from him, and Santa's elves drop a sack's worth of coal on him. As Santa says goodbye and takes off into the sky, Patrick stows away on the back of his sleigh and tries to capture him with a net, throwing him and his reindeer off course.

In the special's closing scene, Patchy sees what he thinks is Santa's workshop and goes inside to read his letter, which says that all he wants for Christmas is to meet SpongeBob. However, it is revealed to the viewers that Patchy is hallucinating and has actually wandered into a cave inhabited by a hungry polar bear who starts chasing him. Nearby, the real Santa observes that Patchy is technically naughty for stealing that mail truck in the first place, and Potty agrees with him.

"Don't Be a Jerk (It's Christmas)", written by Andy Paley and SpongeBob's voice actor Tom Kenny, was originally featured on the 2009 album SpongeBob's Greatest Hits. It was also used for a fan-made music video, also animated in stop-motion, for the 2008 Nicktoons Network Animation Festival. The song's sequence from this special was also used in The All-Star Nickmas Spectacular.

MP3s of "Santa Has His Eye on Me" and "Hot Fruitcake" were included as bonus features on the special's DVD release.

As part of the publicity for the special's debut, Nick Records published a soundtrack album as a digital download on Amazon.com and iTunes on November 6, 2012. The album contains all three of the above-mentioned songs as well as the special's version of the SpongeBob SquarePants theme song, along with eight other songs not used in the special itself.

The track listing is as follows:

The special made its debut on DVD (released by Paramount Home Entertainment), Google Play, and iTunes on October 30, 2012. The DVD contained an animatic, a behind-the-scenes feature, a Yule Log, and downloadable MP3s of "Santa Has His Eye On Me" and "Hot Fruitcake". Copies of the DVD sold at Target stories also included It's a NickToons Christmas!, a bonus disc containing three other Nicktoon Christmas episodes - "A Doomed Christmas", "A Very Brrr-y Icemas", and "Christmas Every Day!" A Blu-ray was released in Canada simultaneously, but was not available in the United States until October 15, 2013. The Blu-ray contains all of the bonus features from the DVD release, as well as the episodes that were on the SpongeBob SquarePants: Nautical Nonsense and Sponge Buddies DVD. 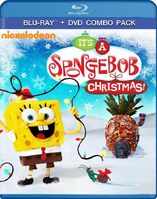 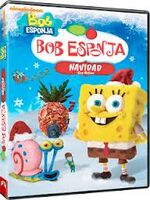 Note: Mrs. Puff appears, but does not have a speaking part.

Squidward has set up his Christmas lights.

Patrick is setting a trap for Santa.

SpongeBob gives some of Plankton's fruitcake to the carolers...

...unaware that it then turns them into jerks.

SpongeBob gives out jerktonium-laced fruitcake at the Christmas parade.

Karen explains that SpongeBob is immune to the jerktonium.

Sandy, under the effects herself, finds out that the jerkotnium is what's causing everyone's misbehavior.

Santa, convinced that Plankton is the only nice one around, gives him the Krabby Patty formula.

SpongeBob tries to explain to Santa that he's been tricked.

ToyBob shows up to destroy Santa.

After being rescued by SpongeBob, Santa finds out that ToyBob was Plankton's creation...

...and promptly punishes him.
Add a photo to this gallery

Retrieved from "https://christmas-specials.fandom.com/wiki/It%27s_a_SpongeBob_Christmas!?oldid=191868"
Community content is available under CC-BY-SA unless otherwise noted.