It's a Very Merry Muppet Christmas Movie is a feature-length made-for-TV Christmas movie starring the Muppets, originally broadcast on NBC on November 29, 2002. The story is loosely based on It's a Wonderful Life, but also includes references to other Christmas movies such as A Christmas Story and How the Grinch Stole Christmas.

The movie is owned by NBC Universal, and as such was not included in the Walt Disney Company's acquisition of The Muppets franchise in 2004. Interestingly, the movie shares a lot of similarities with the 2011 Disney-released film The Muppets, particularly the plot of the Muppets putting on a show to raise money in order to save their theater.

The movie opens with a snowman named Joe Snow (a parody of Sam the Snowman) recounting how the Muppet Theater was going through financial hardship, and the Muppets seeking Kermit the Frog for guidance. Joe is then hurriedly ushered off the set by a technician who checks the script and finds that there is no "narrator snowman" in the film. The tech then denounces Joe as a "Burl Ives wannabe" as the story proper starts in earnest at the Muppet Theater. The Muppets are all exchanging Christmas gifts, but Kermit is in no mood to celebrate with them, for he feels that he has let them all down. Up in Heaven, an angel named Daniel brings this up with his boss as they review what has gone on with Kermit in the past few days.

A few days earlier, Kermit is preparing a Christmas show with his fellow Muppets, with Bobo the Bear playing Santa Claus. The Muppets are approached by Rachel Bitterman, a banker/real estate agent who says that she will foreclose the Muppet Theater if Kermit does not pay her. Pepe the King Prawn leaves the Muppets because he has fallen in love with Bitterman. While trying to raise money to pay Rachel, Kermit tries to find a celebrity to participate in his Christmas play to no avail. Meanwhile, after learning from Pepe that the deadline is midnight, Bitterman changes it to 6:00 p.m. When he sees her with another man, however, Pepe leaves her and warns Kermit about the deadline change. Upon learning this, Fozzie volunteers to deliver the money to Bitterman. But in the process of trying to bring the money to deposit, Fozzie confronts a crazed nature-show host, a gang of angry Whos who mistake him for the Grinch (after he gets dyed green at a Christmas tree lot), and an array of lasers. When Fozzie finally makes it into Bitterman's office, he discovers too late that he has grabbed the wrong bag, containing clothes for the Salvation Army (following his incident at the Christmas tree lot).

After witnessing these events, the Boss allows Daniel to help Kermit. When Daniel arrives, Kermit refuses his help, screaming that he wishes he had never been born. Daniel then takes Kermit to see what would have happened to his friends if he had not existed. In the world without Kermit, Bitterman has changed the park near the Muppet Theater into a shopping center. Gonzo is homeless, and Rizzo the Rat stars in an episode of Fear Factor where a woman has to eat him alive. Dr. Teeth and the Electric Mayhem perform Irish stepdance. Doc Hopper's French Fried Frog Legs from The Muppet Movie has become a famous restaurant franchise. The Muppet Theater has become a nightclub called Club Dot. Dr. Bunsen Honeydew became a rapper, Beaker became a nightclub bouncer, Scooter and Sam the Eagle are club-dancing ravers, and Fozzie is a pickpocket, living on the streets. Worst of all, Miss Piggy is a spinster who lives in an apartment in the Murray Hotel with a series of pet cats, working from home as a phone psychic with a fake Jamaican accent.

Horrified at what he has seen, Kermit has Daniel restore him back to his reality and joyously returns to the Muppet Theater. However, Bitterman arrives to shut the theater down and fights with Miss Piggy. Pepe then arrives and announces that he had the Muppet Theater declared a historical landmark, foiling Bitterman's plan. The movie ends with the Muppets and Joe Snow singing "We Wish You a Merry Christmas."

Over thirty minutes of footage was cut from the original broadcast of this film. Many of the deleted scenes were included as special features on the DVD release, most of them appearing as part of the 20-minute documentary Inside Pepe's Studio. Deleted scenes included the following:

Immediately following the initial airing of the special, NBC released a special VHS package of the film, bundled with the album The Muppet Show: Music, Mayhem and More! It was available for a limited time at the NBC Shop and on NBC.com. In 2003, MGM Home Entertainment released a "Special Edition" DVD of the film with several bonus features, including deleted scenes and outtakes. Universal Home Entertainment released the film on DVD again on October 12, 2010. The disc presented the film in its original widescreen format for the first time in America and retained some of the extras from the MGM disc. It also came with a holiday CD featuring nine songs. A Blu-ray of the film was released on October 7, 2014. 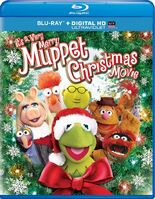 Retrieved from "https://christmas-specials.fandom.com/wiki/It%27s_a_Very_Merry_Muppet_Christmas_Movie?oldid=150020"
Community content is available under CC-BY-SA unless otherwise noted.