Christmas Specials Wiki
Register
Don't have an account?
Sign In
Advertisement
in: Episodes, Disney, Originally aired in syndication,
and 2 more

It's a Wonderful Leaf

"It's a Wonderful Leaf" (originally titled "A Bushroot Christmas" according to the series' production bible) is the Christmas episode of the the Disney Afternoon animated series Darkwing Duck. It was the show's 41st episode in syndication (though it is the show's 54th episode if one counts the episodes that premiered on ABC's Saturday morning line-up in 1991 as part of the show's first season), originally broadcast on December 23, 1991. Its title is a reference to the classic Christmas film It's a Wonderful Life, though the plot has nothing to do with said film.

The episode opens on Christmas Eve at the St. Canard shopping mall, where Dr. Reginald Bushroot, observing the hostile behavior of the other shoppers, finds himself regretting his decision to have waited until the last minute to do his Christmas shopping. While avoiding the frenzied shoppers, Bushroot ducks into a garden shop and starts looking to find presents for the flowers he's able to communicate with. But just as he's found a watering can that would make a perfect gift for one of his plant "friends", another customer takes it from him and knocks him into a nearby barrel. Then, when he accidentally scares a little girl, the girl's mother attacks him with a rake. Bushroot runs out of the store, only to get chased out of the mall by an angry mob. Furious with the horrible treatment he just received from the not-so-jolly mallgoers, Bushroot vows to ruin Christmas for everyone else in St. Canard.

Meanwhile, at Drake Mallard's house, he and Launchpad are decorating the Christmas tree. Just as they've finished, Drake's adopted daughter, Gosalyn, comes riding an old sled downstairs and around the living room until she crashes into the tree. Gosalyn apologizes for wrecking the tree, and Drake takes his old sled from her, only for it to disintegrate immediately afterward. Gosalyn wants to open her presents right now, but Drake insists that she wait until tomorrow morning. Gosalyn of course attempts to unwrap her presents early anyway, but her attempts fail due to Drake having put an alarm on top of the (now-fixed-and-redecorated) tree.

Meanwhile, Bushroot goes to a nearby Christmas tree lot that strangely still has a lot of trees in stock despite it being Christmas Eve, and orders all the trees in the lot to "rise up against their oppressors" and join him in his plan. First, they return to the mall, where Bushroot has one of the trees enact revenge against the customers who attacked him in the garden shop earlier. Specifically, he has the tree steal a doll from the little girl and make it look like the guy who took the watering can stole the doll. Then, after having another tree make it look like another customer stole the bell from the mall's Salvation Army Santa, Bushroot's next step is to kidnap the mall's Santa and pose as the big guy himself. As a "Sinister Santa", he displays all sorts of Grinchiness towards the children (and gets a visit from Herb Muddlefoot) until the little girl's mother returns and gets the kids' parents to chase him out.

At that very moment, Drake and Launchpad happen to be doing some last-minute shopping themselves when they suddenly hear the other customers complaining about their things being stolen. Drake goes to change into Darkwing Duck, but accidentally puts on a Santa Claus costume instead, so he decides to go undercover as a mall Santa to search for clues. Unfortunately, the mallgoers mistake Darkwing for the Sinister Santa and chase after him, but he manages to avoid their wrath by hiding behind a tree and switching to his Darkwing outfit. Darkwing suspects that "some sinister force is sapping the season's spirit", at which point Bushroot reveals himself ("I'm really not sinister; just misunderstood"). When Darkwing lashes out at Bushroot for what he is doing, Bushroot simply responds "Everybody's got to celebrate in their own special way," and then sics three of his trees on Darkwing and Launchpad before escaping. Darkwing shoots one of the trees with his gas gun, covering it in decorations (much to his surprise), and then he and Launchpad escape while the trees are distracted by this. After avoiding the trees' pursuit, they begin following a trail of pine needles that Bushroot's other tree minions left behind.

Bushroot, in the meantime, has stolen a flatbed truck and is driving around the neighborhood, ordering all the trees in the houses (which are apparently receiving his orders via the stars on top of them) to sprout arms and steal the presents spread around them. However, when he comes upon the Mallard household, he finds that it does not have a star on top and puts one on before ordering it to steal the presents. When it does, though, it sets off the tree alarm, much to Bushroot's dismay. Gosalyn and Honker see the tree running off with Gosalyn's presents and, despite the tree subduing them by throwing a wreath around them, they chase after it.

Bushroot pulls up at the front of the Christmas tree lot, thinking he's lost sight of his pursuers, when he suddenly sees Darkwing and Launchpad coming in for a landing on the plastic display. Bushroot and his trees make a run for it, leaving behind most of the stolen presents, just as Darkwing and Launchpad make a crash landing. Just as they emerge from the wreckage, Gosalyn and Honker then crash the Ratcatcher into them. Gosalyn wants to keep all the presents that Bushroot's minions left behind, but Darkwing tells her, Launchpad, and Honker to return the presents to their rightful owners while he looks for Bushroot.

It does not take long for Darkwing to find the half-plant mutant, as Bushroot captures him with a lasso of Christmas lights. When the Duck Knight threatens him with his gas gun, Bushroot warns him that he might upset his new best friend - Douglas Fir, a giant Douglas fir tree. The tree knocks Darkwing into a giant candy cane and then throws a star at him ninja-style, but Darkwing hides behind a fire hydrant to avoid the star. Bushroot orders the rest of his trees to throw everything they've got at Darkwing. In the process, Darkwing ends up pulling the fire hydrant out of the ground, causing water to shoot out from underneath. Darkwing grabs a shovel from a nearby snowman and uses it to direct the water at the trees and Bushroot, freezing them.

After leaving the frozen Bushroot for the police to arrest, Darkwing catches up with his group. Launchpad informs him that they managed to return all the gifts, but they couldn't find the Muddlefoots' presents. Honker glumly heads home, but luckily, Gosalyn has an idea to cheer up her friend. Shortly later, Darkwing, dressed up as Santa, shows up in the Muddlefoots' house (during which he causes Tank's attempt at trapping Santa to backfire on him) and gives them Gosalyn's presents. After that, while heading back home, Darkwing tells Gosalyn that he's proud of her for giving her presents to Honker's family. Just then, Launchpad finds a sled on the doorstep, with a card addressed to Gosalyn from Santa. As Gosalyn goes to play with her new sled, Darkwing wonders who gave her that sled and then, looking in the sky, sees Santa and his reindeer flying overhead.

In 1993, the episode made its home video debut on a VHS tape titled Happy Holidays from Darkwing Duck and Goofy!, which also contained A Goof Troop Christmas: Have Yourself a Goofy Little Christmas. It was later made available on the Darkwing Duck: Volume 2 DVD set, released on August 7, 2007. It was also featured on a stand-alone DVD sold exclusively through the Disney Movie Club in 2008. 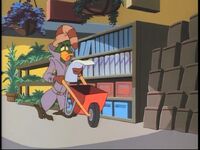 Bushroot tries to do his Christmas shopping. 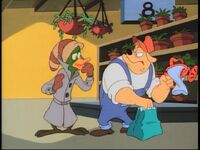 This customer steals the watering can Bushroot was going to buy. 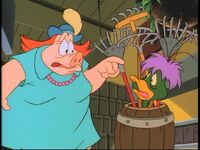 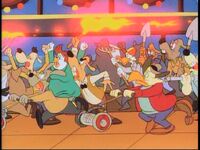 An angry mob chases Bushroot out of the mall. 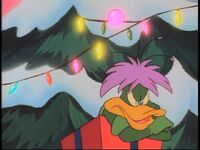 Bushroot decides to ruin Christmas for everyone. 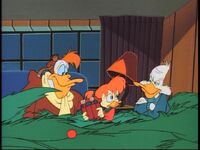 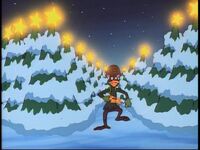 Bushroot commands the trees to join him. 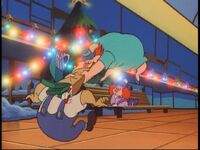 Bushroot's revenge on the customers who attacked him in the garden shop. 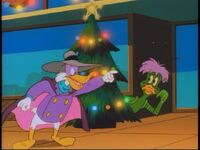 "A-ha! Bushroot! I should have known that you were really at the root of this riotous ruckus." 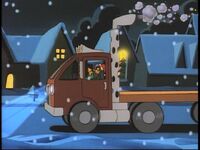 Bushroot commands all the trees in town to steal their owners' gifts. 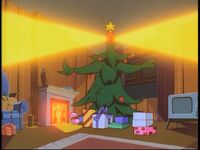 However, Darkwing's tree sets off its own alarm. 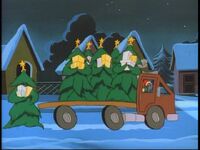 Bushroot rounds up his tree minions. 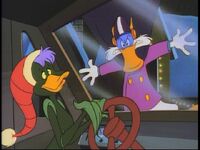 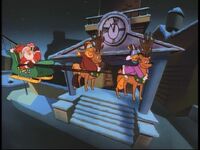 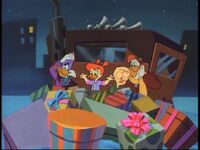 Gosalyn wants to keep the stolen gifts for herself. 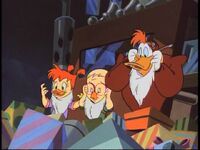 Darkwing assigns Launchpad and the kids to return the gifts. 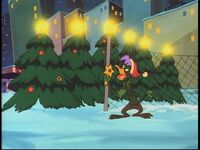 "Deck the duck with EVERYTHING YOU'VE GOT!"

Darkwing directs the water from the broken hydrant... 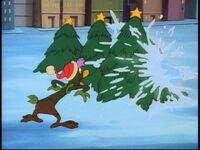 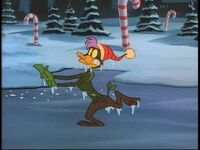 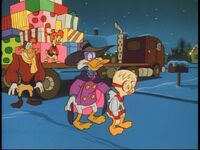 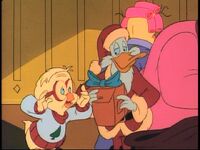 Darkwing makes up for it by playing Santa for the Muddlefoots. 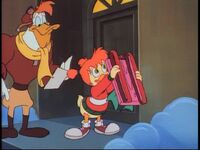 Gosalyn finds she got a new sled... 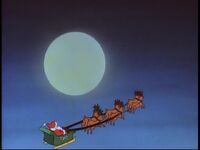 ...which we learn was left by the real Santa.