Christmas Specials Wiki
Register
Don't have an account?
Sign In
Advertisement
in: Movies, Released in the 1940s, Adaptations,
and 6 more

It's a Wonderful Life

This article is about the 1946 film. For The Goldbergs episode, see It's a Wonderful Life (The Goldbergs).

It's a Wonderful Life is a film co-written for the screen, produced and directed by Frank Capra (who won the 1947 Golden Globe for Best Director for his work on this film), and starring Jimmy Stewart, Donna Reed, Henry Travers, Thomas Mitchell, Beulah Bondi, and Lionel Barrymore. It was produced by Liberty Films and originally distributed by RKO Radio Pictures, and released on December 20, 1946. The film currently belongs to Paramount Pictures and is co-owned by Republic Pictures. It received five Academy Award nominations, including Best Actor and Best Picture, but lost in each category. However, it has since come to be regarded as a cinematic classic, particularly through annual television airings in December.

Although the film begins and ends on Christmas Eve, it is not a strict "Christmas movie." Most of the film is actually a straight dramatic story of the life of George Bailey, who keeps trying to get out of his small town of Bedford Falls, but keeps getting pulled back in for various reasons, most of them having to do with Henry F. Potter, the richest man in town. The film chronicles George's life from childhood, graduating from Bedford Falls High School, and his many battles with Potter, as he tries to take over George's family-owned bank, the Bailey Building and Loan.

In Bedford Falls, New York, on Christmas Eve, George Bailey is deeply troubled. Prayers for his well-being from friends and family reach Heaven. Clarence Odbody, Angel Second Class, is assigned to save George and earn his wings. Franklin and Joseph, the head angels, review George's life with Clarence.

At the age of 12, George saved his younger brother, Harry, who had fallen through the ice on a frozen pond, though George lost the hearing in his left ear in this effort. Later, working in the local pharmacy, George luckily noticed that druggist Mr. Gower, despondent over his son's death, had mistakenly filled a child's prescription with poison and saved the poor man from irrevocably ruining his own life by inadvertently killing the child.

As he grows up, George repeatedly sacrifices his dream to travel the world. He waits for Harry to graduate from high school and replace him at the Bailey Building and Loan Association, vital to the townspeople. On Harry's graduation night, George, now 21, discusses his future with Mary Hatch, who has long had a crush on him. Later that evening, George's absent-minded Uncle Billy interrupts them to tell George that his father has had a stroke, which proves fatal. A few months later, Mr. Henry F. Potter, a slumlord and majority shareholder in the Building and Loan, tries to persuade the board of directors to stop providing home loans for the working poor. George talks them into rejecting Potter's proposal, but they agree only on condition that George run the Building and Loan. Giving his college money to Harry, George delays his plans with the understanding that Harry will take over upon graduation.

When Harry graduates from college, he unexpectedly brings home a wife, whose father has offered Harry an excellent job. Although Harry vows to decline the offer out of respect for his brother, George can't deny Harry such a fine opportunity and decides to keep full ownership of the Building and Loan, knowing that this will kill his dream to travel the world.

George calls on Mary, who has recently returned home from college. After several arguments, they reveal their love for each other, and marry soon after. As they depart for their honeymoon, they witness a run on the bank that leaves the Building and Loan in danger of collapse. The couple quells the panic by using the $2,000 earmarked for their honeymoon to satisfy the depositors' immediate needs. Mary enlists the help of George's two best friends, a policeman named Bert and a cab driver named Ernie, to create a faux tropical setting for a substitute honeymoon. The couple embrace while Bert and Ernie sing in the background.

George starts Bailey Park, an affordable housing project. Potter tries to hire him away, offering him a $20,000 salary, along with the promise of distant business trips, something that George always wanted to do. George, initially tempted, turns Potter down after realizing that Potter intends to close down the Building and Loan and take full control of Bedford Falls.

Time passes, and George and Mary raise four children: Pete, Janie, Zuzu and Tommy. When World War II erupts, George is unable to enlist, due to his bad ear. Harry becomes a Navy fighter pilot and shoots down 15 enemy planes, two of which were targeting a ship full of troops in the Pacific. For his bravery, Harry is awarded the Medal of Honor.

On Christmas Eve morning, Uncle Billy is on his way to Potter's bank to deposit $8,000 of the Building and Loan's cash funds. He greets Potter (who has the newspaper reporting Harry's heroics) and taunts him by reading the headlines aloud. Potter angrily snatches the paper, but Billy inattentively allows the money to be snatched with it. Potter opens the paper, notices the money and keeps it, knowing that displacement of bank money would result in criminal charges for George. When a frantic search turns up with nothing, and with a bank examiner due that day, George takes his anger and frustrations out on his family.

A desperate George appeals to Potter for a loan. Potter mockingly and coldly turns George down, and then swears out a warrant for his arrest for bank fraud. George, now completely depressed, gets drunk at the bar owned by his friend, Giuseppe Martini. After crashing his car into a tree, George staggers to a bridge, intending to commit suicide, feeling he is "worth more dead than alive" because of a life insurance policy. Before he can leap, Clarence jumps in first and pretends to be drowning. After George rescues him, Clarence reveals himself to be George's guardian angel.

George does not believe him, but when he bitterly wishes he had never been born, Clarence shows George what the town would have been like without him. Bedford Falls, named Pottersville, is home to sleazy nightclubs, pawn shops and amoral people. Bailey Park is never built. Mr. Gower was sent to prison for poisoning the child and is a despised derelict. Martini does not own the bar. George's friend Violet Bick is a strip-dancer and gets arrested as a pickpocket. Ernie is helplessly poor with his family having left him. Uncle Billy has been in an insane asylum for years. Harry is dead as a result of George not being there to save him from drowning, and the servicemen he would have saved also died. Ma Bailey is a bitter widow, and Mary a single spinster librarian.

George runs back to the bridge and begs to be allowed to live again. His prayer is answered when Bert the policeman finds him and calls out to him by name, and he runs home joyously, where the authorities are waiting to arrest him. Mary, Uncle Billy, and a flood of townspeople arrive with more than enough donations to save George and the Building and Loan. George's friend Sam Wainwright sends him a $25,000 line of credit by telegram. Harry also arrives to support his brother, who is now "the richest man in town". George finds a copy of The Adventures of Tom Sawyer with the inscription, "Dear George: Remember, no man is a failure who has friends. P.S. Thanks for the wings! Love, Clarence." As they sing "Auld Lang Syne", Zuzu notices that one of their Christmas tree's bells is ringing. She tells George that every time a bell rings, an angel gets his wings. George agrees, and looks up to Heaven, winks, and says, "Atta boy, Clarence!"

A CD, featuring excerpts from the film's soundtrack, including music, dialogue and sound effects, was released in 1997 under the Nick at Nite Records label, distributed by Sony Music Entertainment.

In 2021, to commemorate the movie's 75th anniversary, La-La Land Records released an album collecting the film's full score. It was limited to 2,000 copies. The track list was as follows: 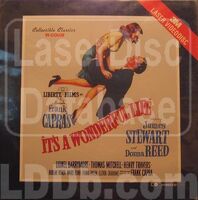 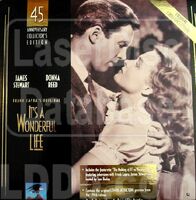 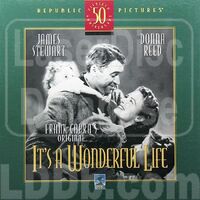 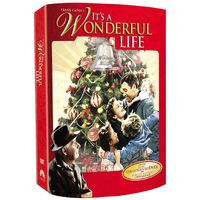 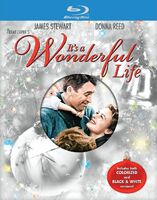 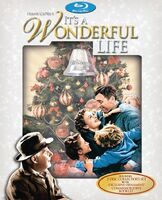 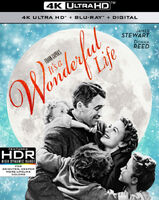 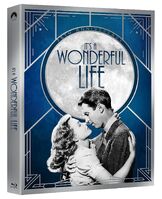 When the original copyright expired in 1974 due to a clerical error by National Telefilm Associates, the rights holders at that time, the film went into public domain, meaning anyone could broadcast the film without the copyright holder getting paid. Ironically, it was during this period, when frequent broadcasts during anytime of the year became a staple of off-hours broadcast, that the film enjoyed a huge resurgence - albeit with copies that were of continually lesser quality, both on TV and on VHS.

Paramount Pictures laid claim to a copyright on the unique music of the film in the 1990s, and is the current rights holder, and since 2002, granted NBC broadcast rights to air the movie twice a year, including Christmas Eve in the USA. NBC's sister channels USA Network and E! also aired the film. In the UK, Universal Pictures, the owners of NBC, who in turn are owned by Comcast, holds the rights. Oddly enough, Paramount held the rights to the movie from 1951 until 1955 when they bought Capra's production company, Liberty Pictures. They sold the right to U.M. and M. Company in 1955, then were purchased by NTA several years later.

A colorized version of the film exists, but it is a subject of controversy for many fans, who feel the process was tampering with a film masterpiece. The colorized version has not been shown on TV in years, but is included on the 2007 2-disc DVD release and the subsequent Blu-ray release.

In 1986, a stage musical titled simply A Wonderful Life was produced. Aside from the songs, much of the story remained the same, with some exceptions. 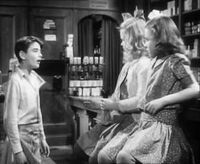 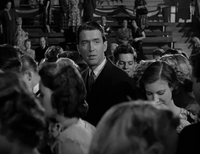 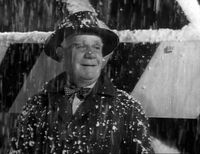 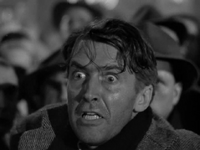 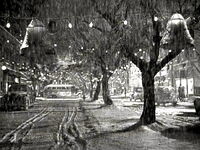 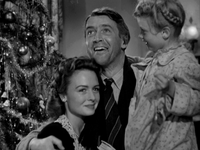