VHS
DVD
Apple TV
Google Play
Amazon Video
Jack Frost is an animated television special, produced and directed by Jules Bass and Arthur Rankin, Jr. and written by Romeo Muller. It premiered on NBC on December 13, 1979. The special is narrated by Pardon-Me-Pete, a groundhog voiced by Buddy Hackett.

Jack Frost, an immortal winter sprite, falls in love with a human girl named Elisa after rescuing her. Jack asks Father Winter if he can become human in order to be with her. Father Winter gives him a chance, but warns that Jack must prove he can succeed as a human, by earning a house, a horse, a bag of gold, and a wife by the first sign of spring; if not, he will become a sprite again. Jack agrees and turns human, assuming the identity of Jack Snip. He runs a tailor shop in the town of January Junction with two friends who also turned human, Snip the snowflake maker and Holly the holiday snow gypsy. Snip and Holly were sent by Father Winter to ensure Jack does not get into trouble (Snip bears similarities in skin tone and clothing to Snow Miser). Elisa is charmed by "Jack Snip", but she harbors romantic dreams of Sir Raveneau, a "knight in golden armor."

Elisa is kidnapped by the evil Cossack King Kubla Kraus, who has an army of Keh-Nights, as well as a menacing mechanical horse named Klangstumper. Kraus also possesses all the brick, gold, and timber that January Junction used to. He lives in a castle on Miserable Mountain with his sidekick, a ventriloquist's dummy named Dommy. After Elisa is rescued by a knight named Sir Raveneau, Kubla vows to destroy January Junction, and he imprisons Jack Snip, Snip, and Holly. Jack decides to become a sprite again in order to whip up the biggest snow storm ever seen, freezing Kraus in his castle. Snip and Holly change back to sprites as well. This tactic works until Groundhog Day comes. Jack Frost uses his shadow to scare Pete back to hibernation, and continues whipping up the storm.

Finally, with only one hour left before the arrival of spring, Jack returns to human form in an attempt to meet Father Winter's conditions and win Elisa. He battles Kubla Kraus which ends with him falling out of his castle and blown very far by Father Winter. Jack then claims the gold, Klangstumper, and the castle. He races off to ask Elisa for her hand in marriage, but during his absence she has fallen in love with Sir Raveneau, and he with her. Jack becomes a sprite again for good, and blows ice onto Elisa's wedding bouquet, turning it white. When asked about the change, she sheds a tear, saying "An old friend just kissed the bride." Snip calls out to Jack that winter wouldn't be the same without him.

Jack Frost was re-aired on the Disney Channel in the early-to-mid 1990s, and then from 1998 through 2017, it was re-aired as part of the annual 25 Days of Christmas programming event on Freeform and its predecessors. In its later years on the channel, Freeform used a rather choppily-made edit of the special that cut out bits of dialogue from most scenes, such as the scene where Jack decides to become human in order to pursue Elisa. This edit included the songs "There's the Rub" and "She Is Beautiful", which in previous years were normally cut from the special for time constraints.

As of 2020, the special's broadcast rights are currently held by AMC, where it now airs as part of their Best Christmas Ever programming event.

This film has been in the public domain since the mid-1990s and has been released on VHS and DVD multiple times. In the fall of 2008, however, Warner Home Video released it as a Deluxe Edition DVD. Since Warner Bros. own all of the original Rankin/Bass film materials of this show (as part of their ownership of Rankin/Bass' post-1973 output), it is considered to be an official version, and it is also the first time the film is displayed from a 35mm print (as opposed to the 16mm used by the public domain versions). The Deluxe Edition DVD disc was later included in Warner's Santa's Magical Stories box set in 2011 and again in the 4 Kid Favorites: Holiday Family Fun Collection DVD set in 2013. It was reissued again as part of the 4 Kid Favorites: Merry Menagerie box set in 2015. 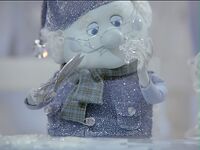 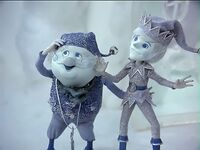 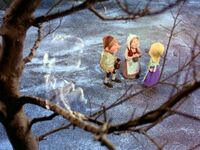 Retrieved from "https://christmas-specials.fandom.com/wiki/Jack_Frost_(Rankin/Bass)?oldid=193896"
Community content is available under CC-BY-SA unless otherwise noted.