Frosty's Winter Wonderland
Jack Frost
Rudolph and Frosty's Christmas in July
The Santa Clause 3
Jack Frost is a sprite-like character with roots in Viking lore, where he is known as Jokul Frosti ("icicle frost"). In Britain and the United States, he is a variant of Old Man Winter and is held responsible for frosty weather, for nipping the nose and toes in such weather, coloring the foliage in autumn, and leaving fernlike patterns on cold windows in winter. He sometimes appears in literature, film, television, song, and video games as a sinister mischief maker.

Under Disney, he appeared as the antagonist of The Santa Clause 3, in which he was portrayed by Martin Short. In this film, he is jealous of the attention that Santa Claus receives and schemes to replace him. To do so, he manages to avoid severe punishment from the Council of Legendary Figures for his actions against Scott by suggesting he be put in community service and help out around the North Pole for an impending visit by Scott's in-laws. The Council agrees, but during his tenure, he sabotages the workshop, causing problems that could possibly delay Scott from making his annual journey. When he discovers the Hall of Snow Globes, and having learned of the Escape Clause, he steals Scott's, freezes Neil and Laura when they catch him, and threatens to do the same to their daughter Lucy if she rats him out to Scott, before locking her in a closet. After his sabotage ends up enraging Scott's in-laws, Frost consoles Scott, and gives him his snow globe as a gift, while also convincing Scott to invoke the Escape Clause by speaking the phrase to activate it. This sends Frost and Scott back 12 years to the night when Scott first invoked the Santa Clause and became Santa. Before the past Scott can come out and fulfill past events, Frost intentionally causes the previous Santa to fall off the roof, and when Scott tries to intervene, Frost knocks him out with a shovel, allowing him to reach the coat first and become the new Santa, creating an alternate timeline as a result. 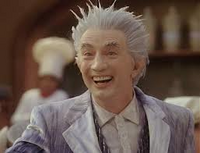 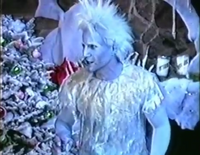 Retrieved from "https://christmas-specials.fandom.com/wiki/Jack_Frost_(character)?oldid=94360"
Community content is available under CC-BY-SA unless otherwise noted.