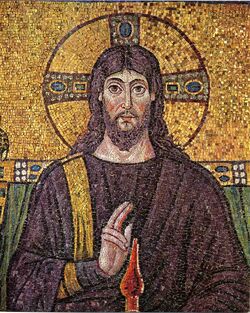 Jesus of Nazareth (c. 5 BC/BCE – c. 30 AD/CE), also known as Jesus Christ, is the central figure of Christianity, and its in rememberance to his birth Christmas is celebrated. Christians view him as the Messiah foretold in the Old Testament and as the son of God, who provided salvation and reconciliation with God to humankind by dying for its sins. However, not all groups that identify themselves as Christian are Trinitarian, and not all Nicene-based groups believe that he is the son of God and God incarnate who was raised from the dead. Although his teachings were first addressed to the Jewish people, Judaism gives him no distinctive status and categorically rejects the claim that he is the Messiah.

The principal sources of information regarding Jesus' life and teachings are the four canonical gospels, especially the Synoptic Gospels, though some scholars believe texts such as the Gospel of Thomas are also relevant.

Critical Biblical scholars and historians believe that the New Testament is useful for reconstructing Jesus' life. He was a Jew who was regarded as a teacher and healer: it is believed that he was baptized by John the Baptist, and was crucified in Jerusalem on the orders of the Roman Prefect of Judaea, Pontius Pilate, on the charge of sedition against the Roman Empire.

Academic debate continues regarding the chronology, the central message of Jesus' preaching, his social class, cultural environment, and religious orientation. Critical scholars have offered competing descriptions of him as a self-described messiah, as the leader of an apocalyptic movement, as an itinerant sage, as a charismatic healer, and as the founder of an independent religious movement. Most contemporary scholars of the historical Jesus consider him to have been an independent, charismatic founder of a Jewish restoration movement, anticipating an imminent apocalypse. Other prominent scholars, however, contend that his "Kingdom of God" meant radical personal and social transformation instead of a future apocalypse.

Christians traditionally believe that Jesus was born of a virgin, :529-532 performed miracles, :358-359 founded the Church, rose from the dead, and ascended into heaven, :616-620 from which he will return :1091-1109 While the doctrine of the Trinity is accepted by most Christians, a few groups reject the doctrine of the Trinity, wholly or partly, as non-scriptural. Most Christian scholars today present him as the awaited Messiah and as God, arguing that he fulfilled many Messianic prophecies of the Old Testament.

Judaism rejects assertions that Jesus was the awaited Messiah, arguing that he did not fulfill the Messianic prophecies in the Tanakh. In Islam, he (Arabic: عيسى‎, commonly transliterated as Isa) is considered one of God's important prophets, a bringer of scripture, the product of a virgin birth, and a worker of miracles. Islam also teaches that he ascended bodily to heaven without experiencing death at the crucifixion. Islam and the Baha'i Faith use the title "Messiah" for him, but do not teach that he was God incarnate.

Retrieved from "https://christmas-specials.fandom.com/wiki/Jesus?oldid=162800"
Community content is available under CC-BY-SA unless otherwise noted.