Howard Langston (Arnold Schwarzenegger) is a hard-working employee at a mattress company, and is stuck doing extra work on the day his son, Jamie (Jake Lloyd), is earning a purple belt in karate. Despite his promise to make it, he runs into trouble with a traffic jam and Officer Alexander Hummel (Robert Conrad), a sadistic cop who forces him to do a sobriety test after catching him speeding on the shoulder. Because of all this, he ends up missing the karate class. In order to make it up to Jamie, he promises to get him anything he wants for Christmas. What he wants is the immensely popular "Turbo Man" doll, based on the Saturday-morning live-action TV show of the same name. Unfortunately, Howard had promised to buy it earlier in the year and, as is the habit with him, promptly forgotten about it. To add further salt to the wound, he learns from his wife Liz (Rita Wilson) that Turbo Man dolls are the must-have gift of the season and that they virtually impossible to find especially this close to Christmas.

Desperate to not disappoint his family again, Howard sets off on a wild goose chase all over Minneapolis-St.Paul to find the doll. At the first store he gets to, he meets Myron Larabee (Sinbad), a post office worker who's son wants a Turbo Man doll as well. It is eventually revealed that this is going to be a "no holds barred" scavenger hunt, with lots of shoving, fighting, arguing, and worse. Throughout Howard's quest, the many stores he hits and the chaos that ensues at each one ultimately results in nothing, and at one point he has another run in with Officer Hummell when he accidentally knocks over his squad motorcycle. During a stopover at the Mall of America, Howard is lured into buying a doll from a con Santa (Jim Belushi), who is the leader of a large counterfeit toy-making group. Unsurprisingly, he ends up paying $500 for a Spanish speaking doll that falls apart the moment he opens the box. Angered at being ripped off, Howard calls the gang "a bunch of sleazy conmen in red suits" and ends up in a brawl with them. The police arrive and bust the ring, and Howard manages to get out of trouble by posing as an undercover officer using a toy badge.

Exhausted and out of fuel, Howard stops at Mickey's Diner and uses their payphone to call home, intending to tell Liz the truth. Jamie answers the phone and, instead of getting Liz, keeps reminding Howard of his promise to to be home in time for the Christmas parade. Losing his patience, Howard yells at Jamie and demands that he give the phone to Liz. In turn, Jamie scolds his father for never keeping his promises and hangs up. Howard encounters Myron at the diner and they share their woe stories over alcohol; Myron explains that he resented his father when he didn't get him a Johnny Seven OMA for Christmas when he was young. Their conversation is interrupted when the KQRS radio station advertises a Turbo Man competition, and whoever can correctly name all of Santa's reindeer wins the prize. Resuming their rivalry, Howard and Myron accidentally damage the payphone while fighting over it, forcing the two to race to the radio station on foot. They barge into the studio (prompting the freaked-out DJ to phone the police) and give the correct answer, only to discover that the prize is just a gift certificate. Enraged, Myron threatens the DJ with a package that he claims to be a mail bomb, but it turns out to be a fake. The police arrive (along with Officer Hummell) and Myron bluffs them into backing off by producing another package and claiming it to be a bomb. After Howard and Myron flee, Officer Hummell inspects the package and declares that it is harmless, only for it to explode in his face when he opens it (revealing that it actually was a bomb).

After returning to the diner to find that his car has been vandalized, Howard decides to give up the search and returns home to explain everything to Liz, only to discover his next door neighbor, Ted (Phil Hartman), (who always seems to be homing in on Liz when he is not around) in his house putting his star on his tree! His blood boiling with anger, Howard exacts revenge by breaking into Ted's house and stealing the Turbo Man doll he bought for his son, Johnny. However, he has a change of heart at the last minute as he could not see himself stealing from a child. Before he has a chance to replace it and escape, he is confronted by Ted's pet reindeer and he unintentionally sets some stuff on fire in the ensuing chaos. This causes him to be caught by Ted and a distraught Liz, who both leave to attend the Holiday Wintertainment Parade with Jamie and Johnny.

Meanwhile, Myron is being hauled off by the police, dismayed by his ultimate failure to retrieve the doll and give it to his son for Christmas. Touched by his words, Jamie gives it to him, saying that he no longer needs it, saying his father is the real Turbo Man. Myron and Howard apologize and become friends, and Howard apologizes to a shocked Officer Hummell for everything. He is declared a hero and is crowd-surfed away. At home, Christmas Eve is finally spent right, as the star is mounted on the tree, and everyone's happy. Liz is so happy that Howard was willing to do so much to get a present for Jamie, that it has her wondering what he got for her. The shocked expression on his face tells the whole story. 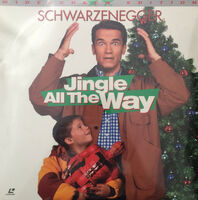 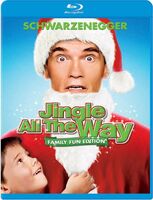 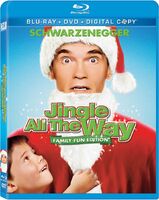 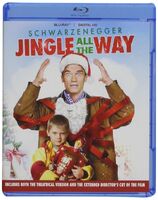 Retrieved from "https://christmas-specials.fandom.com/wiki/Jingle_All_the_Way_(1996)?oldid=155041"
Community content is available under CC-BY-SA unless otherwise noted.