Randy Kornfield (based on Jingle All the Way)
Steve Mazur (writer)

Jingle All the Way 2 is a 2014 direct-to-video comedy film directed by Alex Zamm and starring comedian Larry the Cable Guy and WWE superstar Santino Marella. As the title suggests, it is a sequel to the 1996 film Jingle All the Way, in which this film is based on that film, but it centers on a different family.

Two desperate dads compete in a no-holds-barred battle to be the best father and make this the best Christmas ever. Fun loving, laid back dad Larry is having a bear of a time finding the perfect Christmas gift for his eight-year-old daughter, Noel. The season's hottest toy, Harrison the Talking Bear, is all sold out, and Noel's new stepfather, Victor Baxter, wants to keep it that way — so he can be the one to make her holiday wish come true. When Larry learns that all she wants for Christmas is Harrison, he'll stop at nothing to make her happy and get her the toy of her dreams. 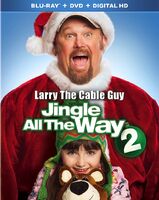 Retrieved from "https://christmas-specials.fandom.com/wiki/Jingle_All_the_Way_2?oldid=180220"
Community content is available under CC-BY-SA unless otherwise noted.