"Last Christmas" is an episode of the British science fiction television series Doctor Who. It was broadcast on BBC One on Christmas Day 2014, it is the tenth Christmas special since the show’s revival in 2005, and the first full Christmas special to feature the Twelfth Doctor. The episode stars Peter Capaldi and Jenna Coleman,[1] with Nick Frost, Natalie Gumede, Nathan McMullen and Michael Troughton guest starring.

We already knew what the Doctor Who Christmas special was called, that it starred Santa and that he isn’t the baddie, but now the BBC has released a short description of the plot – and we can't help but peek at our present early.

“The Doctor and Clara face their Last Christmas. Trapped on an Arctic base, under attack from terrifying creatures, who are you going to call? Santa Claus!”

It’s likely the “terrifying creatures” are the slimy Alien-like monsters glimpsed in the episode trailer, and the Arctic base setting definitely puts a different spin on Santa’s Grotto – but could it also be a reference to classic horror movie The Thing?

Best known from the 1982 remake by John Carpenter, The Thing took place in a similar Arctic facility with a team trying to fight off a shapeshifting monster, which doesn’t sound a million miles away from what we know about this episode so far.

It’s also notable that, in line with comments Steven Moffat made recently, it looks like Nick Frost’s Father Christmas is more of a saviour than an enemy in the episode, despite a terse meeting between him and the Doctor in a Children in Need preview. Phew – Christmas cheer restored!

But then again, could it really be the last Christmas for Clara (Jenna Coleman) and the Doctor (Peter Capaldi)? And what kind of tragedy could keep the two apart? 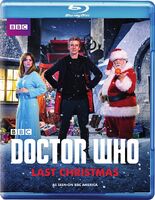 Filming on "Last Christmas" was scheduled to start two weeks after the Series 8 World Tour Promotion, with both Peter Capaldi and Jenna Coleman confirmed to return.[1] Paul Wilmshurst is directing the episode.[2] Filming began on 8 September 2014 in Cardiff,[3] with Wilmhurst tweeting that it would likely take four weeks to complete.[4]

Ian and The Wolf - Santa's Elves

The Doctor drives the sleigh with Clara and Santa

Retrieved from "https://christmas-specials.fandom.com/wiki/Last_Christmas_(Doctor_Who)?oldid=152614"
Community content is available under CC-BY-SA unless otherwise noted.