Jack first appears in the film disguise as an Internet billionaire named "Warren Hutch" arriving in Coldchester wishing to stay in the hotel the reindeer are building. However after the reindeer are imprisoned in the fake hotel, he reveals his true identity and that he is in league with Blitzen and they plan to use the reindeer for Blitzen's Reindeer World.

Later that night, whilst Jack, Blitzen and their rabbit thugs are distracted, Robbie, Donner and Prancer escape. After discovering the trio's escape, Blitzen sends out Jack disguised as Yukon Bob to recapture them. Jack is able to recapture Prancer and Donner and eventually Robbie but not before the reindeer reveals what is going on to a tribe of Vikings he met.

The reindeer then have mind control helmets placed on them which stops them from feeling pain, all except Robbie who is hanging above a pit full of sharp weapons. Jack notices this and asks Blitzen why Robbie is not wearing a helmet to which Blitzen tells him is that he wants Robbie to feel every moment of it (possibly because he still wishes to harm Robbie to get back at Rudolph). Luckily the Vikings arrive and free Robbie who goes off to free the other reindeer. Jack is then confronted by Prancer who pulls off all of Jack's masks and discovers that he is actually a robot being controlled by a Mexican criminal hamster named Carlos whom Prancer throws into prison along Blitzen and the rabbit thugs.

Jack (as "Warren Hutch") with Blitzen

Jack reveals his alliance with Blitzen

Prancer discovers Jack is a robot 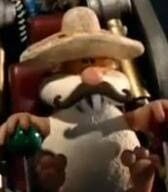 Carlos, Jack's controller
Add a photo to this gallery
Retrieved from "https://christmas-specials.fandom.com/wiki/Long_Eared_Jack?oldid=142209"
Community content is available under CC-BY-SA unless otherwise noted.