Peanuts
Lucy van Pelt is one of the main characters from the newspaper comic strip Peanuts, and as such, she figures prominently in the Peanuts Christmas specials. She is a crabby and cynical eight-year-old girl who is the older sister of Linus and Rerun van Pelt. Often referred to as the world's greatest fuss-budget, she is very bossy toward most of the other characters, particularly Linus and their neighbor Charlie Brown. However, she also shows a softer side when acting as a mentor to Rerun, and harbors an unrequited crush on Schroeder. 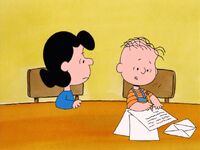 Lucy with Rerun. (I Want a Dog for Christmas, Charlie Brown) 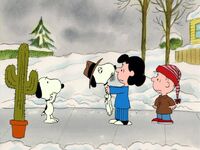