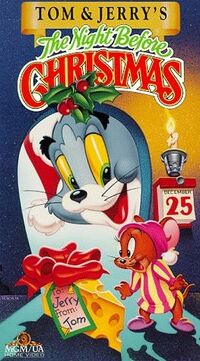 The Night Before Christmas is a 1941 Tom and Jerry short set at Christmastime, and the first Christmas-themed production to star the characters. The short was nominated for the 1941 Academy Award for Best Animated Short Film, but lost to the Pluto cartoon Lend a Paw. In a large house on Christmas Eve, the night before Christmas, nothing is stirring, not even a mouse... or so it seems at first. Jerry Mouse emerges from his hole avoiding a Christmas-themed mousetrap (already baited with a piece of cheese wrapped in a red ribbon) placed by his hole. Jerry quickly heads for the Christmas presents, jumping merrily around the tree, licking candy canes, and jumping onto a plush toy lion that squeaks. Jerry continues jumping on the soft toy, but bounces too hard and lands on what he thinks is another soft toy. Jerry jumps up and down on the grey fur, little realizing that what he is jumping on is, in fact, Tom Cat who has woken up. Tom snarls and just before he can eat Jerry, the quick-thinking mouse grabs a nearby "Not to be opened until Xmas" sticker and instantly places it on Tom's mouth. (more...)

Retrieved from "https://christmas-specials.fandom.com/wiki/Main_Page?oldid=160196"
Community content is available under CC-BY-SA unless otherwise noted.