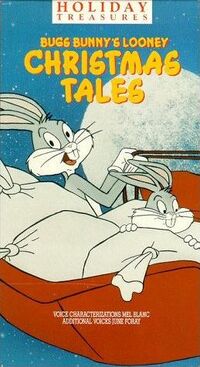 Bugs Bunny's Looney Christmas Tales is a half-hour Christmas television special starring the Looney Tunes characters, in which Bugs Bunny presents three separate holiday stories. Originally aired on CBS on November 27, 1979, it was the first of three Looney Tunes television specials which, instead of compiling and re-editing older shorts, consisted entirely of new material which could later be broken up as individual shorts, introduced by Bugs in the framing footage. All three segments ("Bugs Bunny's Christmas Carol", "Freeze Frame", and "Fright Before Christmas") were later featured as individual shorts in the Looney Tunes Saturday morning and syndicated packages, with individual title cards and limited credits. Follow-up specials, using the same format, were Daffy Duck's Easter Egg-citement and Bugs Bunny's Busting Out All Over. The special opens with Bugs Bunny leading some of his fellow Looney Tunes stars - Porky Pig, Elmer Fudd, Yosemite Sam, Foghorn Leghorn, and Pepé Le Pew - in singing "Deck the Halls". However, Porky and Foghorn have trouble singing solo lines due to their speech patterns, Yosemite Sam refuses to sing solo, and Pepé sings "Alouette" when asked to sing solo. Bugs instead says he'll sing the regular lines of the song while the others pick up on the "Fa-la-las". (more...)

Retrieved from "https://christmas-specials.fandom.com/wiki/Main_Page?oldid=150093"
Community content is available under CC-BY-SA unless otherwise noted.