Mario is the main character of the Super Mario Bros. video game series, and the mascot of the video game company Nintendo. Originally introduced in the 1981 arcade game Donkey Kong, he is a heroic Italian-American plumber who lives in the Mushroom Kingdom. Sometimes accompanied by his brother Luigi, he is often foiling the plans of the villainous giant turtle Bowser and rescuing Princess Peach.

Chronologically, the first Christmas production starring Mario is "Santa Claus is Coming to Flatbush", the Christmas episode of The Super Mario Bros. Super Show!'s live-action segments (which take place before the Mario Bros.' adventures in the Mushroom Kingdom). Because business has been really bad at the time of the events depicted in the episode, the Mario Bros. are so financially poor that Mario is only able to afford two garbanzo beans for their Christmas dinner, and it is shown that the only thing Mario is able to give Luigi is his wrench. Just then, a man with a white beard called Nick shows up, saying that his transportation has been stolen and he needs to use their phone. Mario invites "Nick" in and gives him the soup Luigi was making for dinner; later, he and Luigi then give Nick the presents they had planned to give to each other. On Christmas morning, Mario and Luigi find that "Nick" left their presents for each other under their tree, along with a note saying that the police found his transportation, signed "S.C."

In "Koopa Klaus", the Christmas episode of the animated half of The Super Mario Bros. Super Show!, Mario and his friends plan to spend Christmas vacation in Hawaii Land, but Toad instead guides the group to the North Pole. When they find out that Bowser is also at the North Pole, Mario deduces that his nemesis is heading to Santa Claus's workshop. Upon seeing Bowser having frozen Santa's workshop and captured Santa, Mario and Luigi catapult an ice block to knock the Koopa King and his captive out of his flying sleigh. Mario and his companions chase after Bowser until he comes to a cliff and threatens to drop Santa into icy water. When Bowser makes the mistake of causing an avalanche, Mario manages to use his plumber's snake to lasso Santa away from the oncoming avalanche. After his workshop is thawed out, Santa allows Mario and his friends to join him in delivering presents to everyone.

Finally, in "The Night Before Cave Christmas", the Christmas episode of Super Mario World, Mario notices that the citizens of Dome City are acting rather crabby to each other, so he decides to introduce them to Christmas to get them to be nicer to each other (despite Luigi pointing out that it is the middle of August). After everyone in Dome City has gotten into the Christmas spirit, Mario, along with Luigi and Princess Peach, works on making toys for the children, and he also dresses up as Santa Claus to portray the role. When Bowser steals the toys, Mario, accompanied by his dinosaur friend Yoshi, ventures into Bowser's Castle to retrieve the stolen presents, during which he also rescues Oogtar the caveboy, who had gotten captured when Bowser was stealing the presents. At the end of the episode, Oogtar brings a present to Mario and wishes him a Merry Christmas.

A parody version of Mario, voiced by Dan Castellaneta, makes a cameo in The Simpsons episode "Marge Be Not Proud". He appears in Bart Simpson's imagination and, along with Luigi, Donkey Kong, and Sonic the Hedgehog, encourages Bart to steal a copy of the Bonestorm video game. 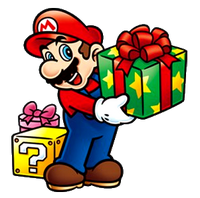 Official artwork of Mario, as he appears in the games, giving out Christmas presents. 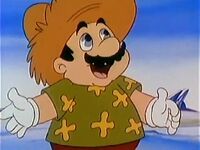 Mario dressed for his vacation in Hawaii Land, as seen in "Koopa Klaus". 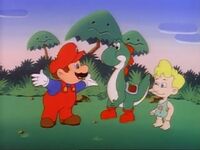 Mario explaining Christmas to Yoshi and Oogtar in "The Night Before Cave Christmas". 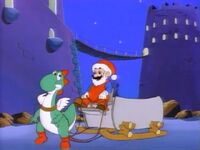 Mario with Yoshi as his reindeer in "The Night Before Cave Christmas".

Mario's cameo in "Marge Be Not Proud".
Add a photo to this gallery

Retrieved from "https://christmas-specials.fandom.com/wiki/Mario?oldid=137512"
Community content is available under CC-BY-SA unless otherwise noted.