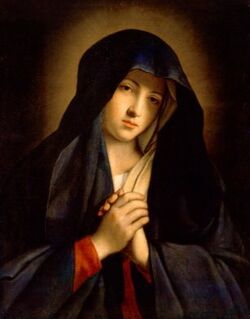 Mary (September 8, 20 BC? - August 15, 45 AD?) Aramaic, Hebrew: מרים, Maryām Miriam; Arabic:مريم, Maryam was a Jewish woman of Nazareth in Galilee, identified in the New Testament[Mt. 1:16,18–25] [Lk. 1:26–56] [2:1–7] as the mother of Jesus through divine intervention (see Annunciation and Virgin Birth), and wife of Joseph. She has been an object of veneration in the Christian church since the apostolic age. Throughout the ages she has been a favorite subject in Western art, music, and literature.

The New Testament describes Mary as a virgin (Greek παρθένος, parthénos). Christians believe that she conceived her son, Jesus, miraculously by the agency of the Holy Spirit. This took place when she was already betrothed (engaged) to Joseph and was awaiting the concluding rite of Jewish marriage, the formal home-taking ceremony. She married him and accompanied him to Bethlehem. Roman Catholic doctrine assumes that the brothers of Jesus referred to in the New Testament were Joseph's sons by an earlier marriage, and that she remained a virgin.

The New Testament begins its account of Mary's life with the Annunciation, the appearance to her of the angel Gabriel heralding her divine selection to be mother of Jesus. Church tradition and early non-biblical writings state that her parents were an elderly couple named Joachim and Anne. The Bible records her role in key events of the life of Jesus from his virgin birth to his crucifixion. Other apocryphal writings tell of her subsequent death and bodily assumption into heaven.

All Christians affirm that Jesus was born of the Virgin Mary, although some may argue about the meaning of the term virgin and virgin birth. Some Christians argue that in the Gospels, virgin is a term used to describe a young woman of marriageable age, and not a virgin in the modern sense.[7]

Christians of the major ancient traditions including the Catholic Church, Anglican Communion, and the Eastern Orthodox Church believe that Mary, as mother of Jesus, is the Mother of God (Μήτηρ Θεοῦ) and the Theotokos, literally, Birthgiver of God. This doctrine was confirmed by the First Council of Ephesus in 431. Roman Catholic, Orthodox, and some Anglican Christians regard the Virgin Mary as a link between heaven and earth. They believe in her bodily assumption. Since AD 431, she has been given the title Theotokos (Mother of God). Catholics believe that she lived a sinless life, was conceived and born without the stain of Original Sin, thereby making her sinless, perfect, and immaculate from all forms of evil.[8] They venerate her as intercessor and mother of the church. They believe strongly in her mercy and her power to intercede with God.[9] Protestants revere her as the mother of Jesus, for her humility and motherly love, but do not follow these devotions nor refer to her as the Mother of God or Theotokos. In Islam she is regarded as the virgin mother of the prophet Jesus. She is described in the Qur'an, in the Sura Maryam (Arabic: سورة مريم‎).

Retrieved from "https://christmas-specials.fandom.com/wiki/Mary?oldid=127446"
Community content is available under CC-BY-SA unless otherwise noted.