Mickey's Christmas Carol is a 1983 theatrical featurette featuring established Disney characters enacting Charles Dickens' A Christmas Carol. The production, hailed as Mickey Mouse's big-screen comeback (despite his limited supporting role), was inspired by An Adaptation of Dickens' Christmas Carol, Performed by The Walt Disney Players, a 1974 record album conceived by Alan Young and Alan Dineheart. The film also marked the first screen production in which Young provided the voice of Uncle Scrooge McDuck, whose voice he had provided on the aforementioned album. Young would go on to reprise the voice of Scrooge in nearly every subsequent production to feature the character, most notably the animated television series DuckTales, until his death in May 2016. The featurette also marked the first theatrical outing for Wayne Allwine as the voice of Mickey Mouse (who had previously voiced the character in animation produced for The New Mickey Mouse Club TV series in 1977) as well as Clarence Nash's last theatrically-released performance as the voice of Donald Duck.

The film was nominated for the 1983 Academy Award for Best Animated Short Film; however, it lost to Sundae in New York.

On Christmas Eve, while all of Victorian England is in the merry spirit of Christmas, Ebenezer Scrooge (played by Scrooge McDuck) thinks only of the money he has made and of making more (apparently, he charges people 80% interest, compounded daily). While Scrooge's selfish thoughts cascade in his head, Bob Cratchit (Mickey Mouse), exhausted and underpaid, continues to work long and hard for him. Cratchit reluctantly asks for a "half day off" for Christmas, to which Scrooge replies it will be unpaid (in contrast to the original version where Scrooge is irritated at giving Cratchit Christmas off with pay). Scrooge's nephew Fred (Donald Duck) comes in to invite Scrooge to his family's Christmas dinner, but Scrooge turns him down. When collectors Rat and Mole, along with beggars on the streets, kindly ask for a simple donation, Scrooge turns them down, saying that if he does, then the poor will no longer be poor and the collectors will be out of work, "and you [can't] ask me to do that, not on Christmas Eve."

That night, the ghost of Scrooge's greedy former business partner Jacob Marley (Goofy) appears and scares Scrooge out of his wits. When Scrooge commends him for his ruthlessness, Marley chuckles a hearty "Yup", but then recalls his sinfulness, and tells that because of his cruelty in life, he is doomed to wear heavy chains for eternity ("maybe even longer"). He warns that a similar fate, if not worse, will befall Scrooge unless he changes his ways. Marley then leaves, falling down the stairs when he tries to avoid tripping over Scrooge's cane again and letting out his signature Goofy holler.

Scrooge dismisses the incident, but is later awoken by The Ghost of Christmas Past (Jiminy Cricket). He shows Scrooge his past, when his growing love of money led him to cruelly break the heart of his fiancée Isabel (Daisy Duck) by foreclosing on the honeymoon cottage's mortgage. (This is in sharp contrast to the original novel where Belle is the one who ends the engagement with Scrooge in a relatively amicable manner.)

Not long after the first visit, the Ghost of Christmas Present (Willie the Giant) arrives, surrounded by turkey, mince pies, and suckling pigs. He shows him the poverty-stricken Cratchit family, who still keep a festive attitude in their home despite their hardships. Bob's young son, Tiny Tim (Morty Fieldmouse), is revealed to be ill, and Willie foretells tragedy if the family's hapless life does not change. However, just when Scrooge is desperate to know Tim's fate, the Ghost of Christmas Present and the house both vanish.

The Ghost of Christmas Yet to Come (a hooded figure later revealed to be Pete) arrives to take Scrooge to the future in a graveyard. When he sees Bob mourning for Tiny Tim, who has passed away (indicated by Bob placing Tim's crutch on his memorial marker), Scrooge fearfully asks whether this future can be altered. He then overhears the laughter of two gravediggers (two weasels from The Wind in the Willows), who are amazed and humored by the fact that no one attended the funeral of the man whose grave they were digging for. After the weasels leave to take a break from their work, Scrooge and the ghost approach the lonely grave, where the ghost lights a cigar, revealing Scrooge's name on the tombstone, and gives him a shove into his grave, calling him "the richest man in the cemetery". Scrooge falls towards his coffin as the lid opens and the flames of Hell burst out. Scrooge clings to a vine but it snaps and Scrooge falls into his grave, shouting his repentance, as the ghost laughs cruelly.

Suddenly, he is back home on Christmas morning. Having been given another chance, Scrooge throws his coat over his nightshirt, dons his cane and top hat, and goes to visit the Cratchits, cheerfully donating generous amounts of money along the way and telling Fred that he will come to dinner at his house after all. He tries to play a ninny on Bob, dragging in a large sack supposedly filled with laundry and announcing gruffly that there will be extra work in the future. But to the Cratchits' joy, the sack is instead filled with toys and a big turkey for dinner. Scrooge gives Bob a raise and makes him his partner in the counting house, and Tiny Tim proclaims the original character's famous line of "God bless us, everyone!"

The above role casting is mostly the same as the version presented in the Dickens' Christmas Carol, Performed by The Walt Disney Players record, with the exception of the poor collectors and two of the ghosts. In the original record, the collectors were portrayed by (ironically) John Foulfellow and Gideon from Pinocchio, the Ghost of Christmas Past was played by Merlin from The Sword in the Stone, and the Ghost of Christmas Yet to Come was portrayed by Queen Grimhilde (in her witch form) from Snow White and the Seven Dwarfs.

Mickey's Christmas Carol was originally intended to debut as a prime-time special on CBS in 1982, with a comic strip adaptation running in the Walt Disney's Treasury of Classic Tales Sunday newspaper comic strip from October 3rd to December 26th of that year. However, due to an animators' strike, the special would not be finished in time for Christmas of that year, resulting in CBS instead running A Disney Christmas Gift in the planned time slot.

The film premiered theatrically in the United Kingdom on October 20, 1983, alongside a reissue of The Jungle Book, and was then packaged together with a re-release of The Rescuers in the United States, starting on December 16th of the same year. It was billed as Mickey's "big-screen comeback" despite him not being the main character (his last film, The Simple Things, was released thirty years earlier, in 1953).

The film made its televised premiere on NBC on December 10, 1984, and was rebroadcast there until 1990, after which it aired on CBS from 1991 to 1996. The NBC and CBS broadcasts spanned a full hour, with the first half consisting of three winter-themed theatrical Disney shorts - Donald's Snow Fight, Pluto's Christmas Tree, and The Art of Skiing. Each segment was preceded by a narrative wraparound segment in which one of the characters (Donald, Pluto [with Mickey translating], Goofy, and Mickey, respectively) would talk about their most memorable Christmas moments, thus leading into the cartoon in question. Each of the wraparounds featured paintings of the characters similar to those used in the film's opening credits sequence, which were all drawn by Michael Peraza Jr.

From 1988 onward, The Art of Skiing was removed from the annual broadcast, replaced by a different segment at the end of the hour each year, which was usually a behind-the-scenes featurette promoting the latest Disney animated feature. The 1988, 1989, and 1990 telecasts included behind-the-scenes featurettes on Oliver and Company, The Little Mermaid, and The Rescuers Down Under, respectively, while the 1991 broadcast ended with a retrospective on Fantasia and a behind-the-scenes look at Beauty and the Beast. The 1993 and 1994 broadcasts instead included behind-the-scenes looks at The Nightmare Before Christmas and Rudyard Kipling's The Jungle Book, and the 1995 broadcast included a sneak peek at The Hunchback of Notre Dame.[1] CBS' final airing in 1996 concluded with a sneak peek at Hercules.

After CBS dropped the special, it moved to ABC, which had by now been acquired by Disney, and aired there from 1997 to 2003, no longer accompanied by the extra shorts and wraparounds. On cable, it was also aired annually on the Disney Channel from 1987 to 1999 and from 2002 to 2006, and on Toon Disney (prior to it being replaced by Disney XD) on Christmas Day in 2008. From 2008 to 2018, it was aired annually on ABC Family (later renamed Freeform) as part of the 25 Days of Christmas, but with several abrupt edits.

For the Christmas season of 2011, the Premiere Theatre in the Disney's Hollywood Studios theme park at Walt Disney World showed this special in rotation with Phineas and Ferb Christmas Vacation! and Prep & Landing: Naughty vs. Nice from December 23-31.

In the same year the special began airing on television, Disney released Mickey's Christmas Carol on VHS, Betamax, CED, and Laserdisc. All of these releases also contained a special behind-the-scenes documentary, The Making of Mickey's Christmas Carol. However, when Disney released the special on VHS and Laserdisc again as part of the Walt Disney Mini-Classics line on October 19, 1990, the making-of documentary was only included on the latter format. Disney released the special on VHS again in 1994, this time as part of the Favorite Stories video series.

The special made its DVD debut in 2001, when it was featured, with its opening credits edited out, as the last cartoon played in the direct-to-video compilation film Mickey's Magical Christmas: Snowed in at the House of Mouse. The full special was later featured on the Walt Disney Treasures: Mickey Mouse in Living Color, Volume 2 DVD set in 2004, though it was cropped to widescreen. However, to date, it is also the only DVD release of the special to also include the making-of documentary from the 1984 video releases. The special then appeared, in its original 4:3 aspect ratio, on the Classic Cartoon Favorites, Volume 9 - Classic Holiday Stories DVD in 2005 and the Walt Disney Animation Collection, Volume 7: Mickey's Christmas Carol DVD in 2009. A special 30th Anniversary Edition DVD and Blu-ray, both of which contained five other winter-themed Disney shorts (The Hockey Champ, Pluto's Christmas Tree, The Art of Skiing, Corn Chips, and the Mickey Mouse Shorts episode "Yodelberg") was released on November 5, 2013; however, it too had the special cropped to widescreen, and was also criticized for its heavy use of digital noise reduction. (Unfortunately, the print used on the 2013 DVD and Blu-ray is also used on Disney+.) 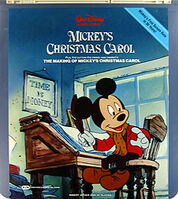 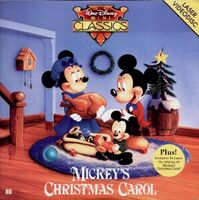 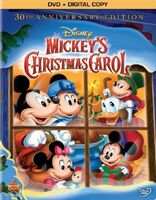 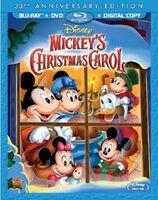 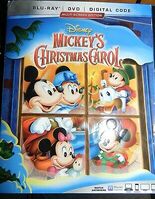 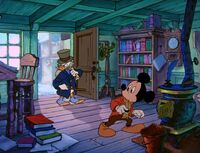 Scrooge arrives at his counting house. 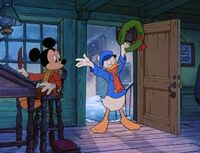 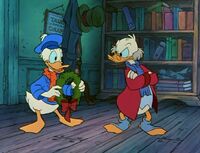 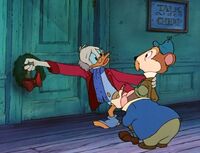 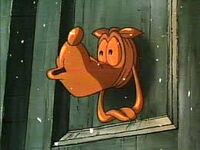 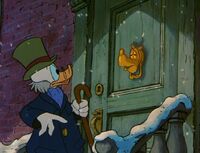 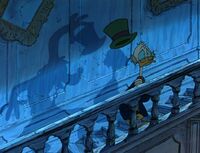 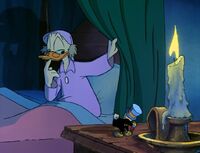 Scrooge meets the Ghost of Christmas Past (Jiminy Cricket)... 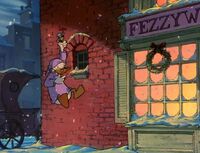 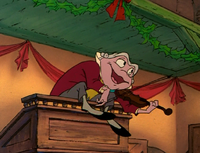 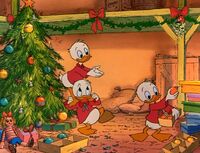 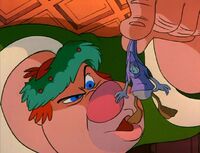 Scrooge meets the Ghost of Christmas Present (Willie the Giant). 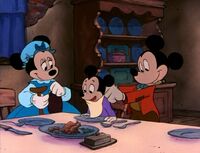 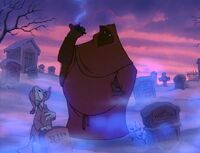 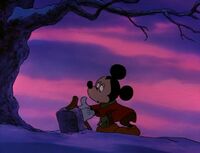 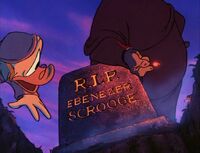 The Ghost of Christmas Future shows Scrooge his own grave... 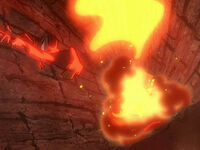 ...and then pushes him into it. 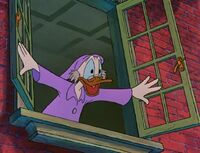 Scrooge awakens to find he's been given another chance. 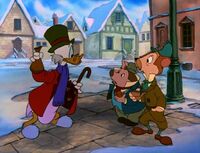 He starts by giving money to Ratty and Mole... 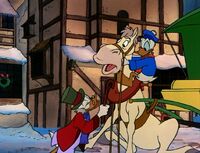 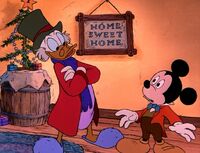 Scrooge promotes Cratchit to be his new partner.