Christmas Specials Wiki
Register
Don't have an account?
Sign In
Advertisement
in: Specials, Disney, The Nutcracker,
and 2 more

Mickey's Nutcracker is a television special broadcast on The Disney Channel in 1992. It is a televised version of a holiday stage show that was performed in the Videopolis theater at Disneyland Park & Resort in California.

The show opens with Minnie Mouse hosting a Christmas party at her house, attended by fellow Disney characters Pluto, Goofy, Chip 'n' Dale, Roger Rabbit, and Tigger, and human neighbors Conrad, Tina, and Ethel. The story's narrator then arrives to give Minnie her Christmas present - a nutcracker in the likeness of Mickey Mouse. After the party (which the narrator remarks to the other characters needs to be over in order to continue the story), Minnie, too excited to sleep, starts dancing with her new nutcracker. When midnight strikes, Mickey the Nutcracker suddenly comes to life. He explains to Minnie that every year at Christmas Eve, he comes to life, accompanied by his friends - a quintet of tap-dancing, singing tin soldiers.

After their song, the soldiers and the mice go to get some snacks when suddenly, an evil pack of rats show up. After the narrator introduces them to the leads, the rats' leader, the Rat King, arrives. The narrator explains that the Rat King was once a handsome prince who was put under an evil curse that can only be undone by the thing rat kings hate most, sugar. The Rat King announces his plans to ruin Christmas and picks a fight with the Nutcracker and his soldiers, but Minnie tells them she won't have a big fight going on in her house. The soldiers knock out the Henchrats, and Minnie conks out the Rat King when he attempts to kill the Nutcracker. The rats quickly escape, and the soldiers go off to get another snack. The Nutcracker, grateful to Minnie for saving his life, offers to take her to his home kingdom, Candyland, using a sleigh (driven by Pluto as a reindeer) as their mode of transportation.

Shortly into their journey, they arrive at the Enchanted Snowflake Forest, where they meet and dance with the Dancing Snowflakes and their leader, the Queen of the Snowflakes (who, as Minnie notices, resembles Ethel). After the pair depart, the Rat King suddenly shows up in the forest, looking for the mice. The Snowflake Queen tries to cast a spell of her own on him, but her wand shorts out, so she decides to call Acme Exterminating. The Rat King then overhears the narrator talking about Minnie and the Nutcracker going to Candyland and worries about having to go there.

The Nutcracker and Minnie arrive at Candyland, where they're greeted by the mayor, who resembles Goofy. The mayor declares Minnie as Candyland's national heroine for saving the Nutcracker's life earlier. Minnie is introduced to the town's candymasters (Chip 'n Dale), the dentist (Roger Rabbit), and the sheriff (Tigger), and engages in song and dance. During this, the Rat King ties up the narrator and then takes over the story, saying that everyone got sick on the candy they ate. He then peeks ahead in the story, sees that he's supposed to get arrested by the sheriff, and promptly tears that page out of the book. The Rat King makes up his own ending in which he takes over Candyland (or stops the actual show in the TV version, which confuses the rest of the cast), but the Nutcracker puts a stop to this by clouting him with a bag of sugar. The sugar turns the Rat King back into the handsome prince he used to be (who resembles Conrad). No longer evil now, the prince thanks the Nutcracker for changing him back in time for the ending. Goofy then asks the narrator how does the story end, but the narrator doesn't know, since the last few pages got torn out. The Nutcracker comes up with one, though - he asks Minnie if she'd be his princess and stay in Candyland with them, which she happily agrees to do. 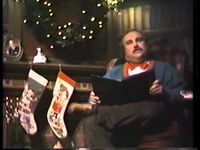 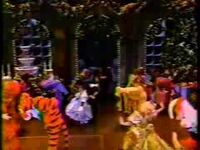 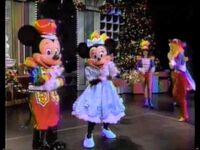 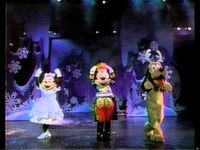 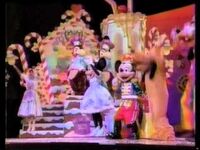 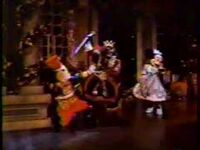