Mickey's Once Upon a Christmas is an animated direct-to-video Christmas anthology film produced by Disneytoon Studio in 1999. The movie consists of three original short segments starring Mickey Mouse, Donald Duck, Goofy, and their friends. It won the Award for Best Animated Featured Film at the 5th Kecskemét Animation Film Festival, and was also nominated for the 2000 Annie Award for Best Animated Home Entertainment Production, which it lost to An Extremely Goofy Movie.

The film was followed by Mickey's Twice Upon a Christmas in 2004.

The first story, an adaptation of Christmas Every Day by Willaim Dean Howells, opens when Huey, Dewey and Louie wake up on Christmas morning and open up their presents even though they are supposed to wait for Daisy, Uncle Scrooge, and the previously-unmentioned Aunt Gertie. After they take their new sleds from Uncle Donald (without bothering to read the card) and go sledding, have Christmas dinner and sing carols, it is time for the boys to go to bed. Having enjoyed the day immensely, the boys then wish that it would be Christmas every day. Their wish is granted and at first the three are joyful at having Christmas every day.

After a few days, however, the boys begin to get sick of Christmas being every day, soon realizing that every day will be exactly the same as the day when they first made their wish. They decide to change the course of action of the next day by playing tricks and pranks, including swapping a live turkey with the cooked one. Unfortunately, this creates a mess and the day turns out to be a bad Christmas for the rest of the family, especially Donald. The boys then finally read the gift card that was given to them which they had previously disregarded. The card is from Donald and Daisy; it wishes them love and explains that Christmas isn't just about presents, it's about being with family.

Upon learning how hard their family has tried to make Christmas better for them, the boys feel guilty for their pranks. They then decide to make amends and make the next day the best Christmas day ever. They switch the turkey with ham, give Aunt Gertie exclusive kisses, and join in on singing carols. When Donald questions their behavior, they admit that they are up to something and eventually present him with a gift of their own - a boat that they built from the sleds he gave them. The next day shows that Christmas is finally over, and Huey, Dewey and Louie all become happy. The narrator explains that Christmas can't always be here but that the feeling it gives us can always be here.

Goofy and Max are writing their letter to Santa Claus. They finish it and rush off after the postman, managing to catch him just in the nick of time. After mailing the letter, Max mentions to his dad that he wants a snowboard for Christmas and hopes that Santa will bring it, but their next-door neighbor, Pete, insists that Santa does not exist. Goofy, however, tells Max that Santa does exist, and that he should never stop believing in him.

The next evening, Goofy and Max visit a poor family who lives nearby to give them a Christmas dinner. Goofy then dresses up as Santa Claus for the children, but one of the family's kids pulls off his hat and beard, exposing him. This upsets Max and makes him think that his dad was lying to him about Santa, and he runs home upset. Goofy tries to cheer him up, unsuccessfully, and then decides to prove to Max that Santa Claus really does exist by staying up all night to keep an eye out for him.

After quite a few hours of waiting, Goofy sees someone coming out of the chimney on Pete's roof, but it turns out to be a Beagle Boy robbing Pete's house. Goofy then falls off the roof and goes into a deep depression, now believing that everything Max said was true. Max eventually cheers his dad up by dressing as Santa Claus himself. After Goofy finds out it's actually Max, they look up into the sky and see the real Santa Claus, who gives Max the snowboard he wanted and then blows the snow from Goofy's house onto Pete's house to teach Pete a lesson. Max then tells his dad that he is going to go share his present with little Jimmy (one of the kids from the poor family). The narrator explains that Christmas is found in the way that we live by not what we receive but by what we give.

In this adaptation of The Gift of the Magi, Mickey and Minnie Mouse are trying to gather enough money to buy the perfect gift for each other. Mickey is working at Pete's Christmas tree lot so he can earn enough money to buy Minnie a gold chain for her one heirloom, her watch. However, after Mickey suggests a poor family buy a small Christmas tree that he found out back instead of one of Pete's ten-foot trees, Pete takes away the money he has earned and kicks him out. Pete ends up getting payback for his actions, though, as he unintentionally stuffs the money he took from Mickey into his pocket along with his still-smoldering cigar, leading to a chain reaction that leaves him charred, burnt, and singed, and then watching helplessly as his ten-foot Christmas trees get burned down.

Mickey plays his harmonica for a Charity Toy Drive by the fire department and is told that his harmonica plays so great that it must be worth lots of money. This gives Mickey the idea to trade his harmonica for the chain, so he and Pluto rush off to the store. Later, at Minnie's house, Mickey gives her the chain for her watch and Minnie gives him a case for his harmonica. Of course, the irony is that Minnie traded her watch for the case -- just as Mickey has traded his harmonica -- so the gifts are essentially useless, but the couple are happy to know they were willing to give up their most prized possessions for each other. As in the original story, the thought behind each gift is what counts.

A Blu-ray/DVD combo pack release, which also included the sequel, was released on November 4, 2014. Unlike the original DVD release, both the Blu-ray and the included DVD present the film in its original widescreen aspect ratio. The "Gift of the Magi" read-along and the two sing-alongs from the previous DVD release were also included on both discs, but the SHeDAISY music video was dropped.

The film will be part of the initial line-up for the Disney+ streaming service. 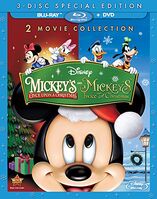 Mickey's Once Upon a Christmas 2-Movie Collection Blu-ray
Walt Disney Studios Home Entertainment
November 4, 2014
Add a photo to this gallery

The film has aired annually on the Disney Channel since 2004, on ABC Family/Freeform since 2009, and on Disney Junior since 2011.

Note: Horace Horsecollar, Clarabelle Cow, a Beagle Boy, Owl from Winnie the Pooh, but do not have speaking roles.

Retrieved from "https://christmas-specials.fandom.com/wiki/Mickey%27s_Once_Upon_a_Christmas?oldid=150021"
Community content is available under CC-BY-SA unless otherwise noted.