Christmas Specials Wiki
Register
Don't have an account?
Sign In
Advertisement
in: Articles that need a longer synopsis, Article stubs, Episodes,
and 7 more

On Christmas Eve, Mrs. Claus visits the Clubhouse requesting Mickey and company's help back at the North Pole. It turns out Santa is stuck on Mistletoe Mountain because his sleigh broke down. 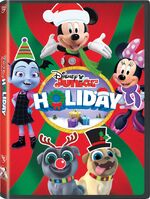 Over a decade after its original DVD release, the episode was made available on the official Disney Junior U.S. YouTube channel to promote the then-new show Mickey and the Roadster Racers.