Christmas Specials Wiki
Register
Don't have an account?
Sign In
Advertisement
in: Movies, Award winners, Released in the 1940s,
and 4 more

Miracle on 34th Street (originally titled Christmas Miracle on 34th Street; initially released as The Big Heart in the United Kingdom) is a 1947 film starring Maureen O'Hara, John Payne, Natalie Wood, and Edmund Gwenn. Notably the first Christmas movie released by 20th Century Fox, it is a story set in New York City following the Macy's Thanksgiving Day Parade, in which people find themselves wondering whether or not a department store Santa might be the real thing. Because of its Christmas theme, the film has become a perennial Christmas favorite, even though it was released in June of that year (the reason being that studio head Darryl F. Zanuck believed that more people go to the movies in warmer weather[1]). Davies also penned a short novel version of the tale, which was published by Harcourt Brace simultaneously with the film's release.

Ignoring instructions to steer parents to goods that Macy's wants to sell, Kris tells one female shopper to go to another store for a fire engine for her son that they don't have. She is so impressed that she tells Julian Shellhammer, head of the toy department, that she will become a loyal customer. Kris later informs another mother that arch-rival Gimbel's has better skates for her daughter.

Kris is uplifted by Susan's letter. Just then, Fred learns that over 50,000 pieces of mail have been delivered to him. Seeing an opportunity, Fred presents Judge Harper with three letters addressed only to "Santa Claus" and notes that they have been delivered to Kris by the United States Post Office, a branch of the federal government. When he demands that Fred produce the "further exhibits" he mentioned, he is soon hidden behind the bags of letters - 21 in all. He rules in favor of Kris. Afterwards, Doris invites Kris to dinner, but he reminds her that "it's Christmas Eve!"

The film was rereleased on VHS and Laserdisc in 1987 by CBS/FOX Video's Playhouse Video division.

In October 2009, 20th Century Fox released the black-and-white version on Blu-ray. It included all the extras from the 2006 DVD except for the 1955 remake. A 70th Anniversary Edition DVD and Blu-ray were released on October 10, 2017. 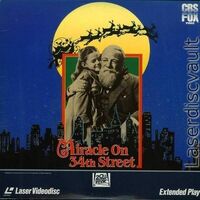 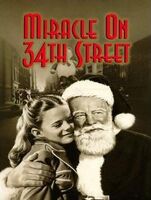 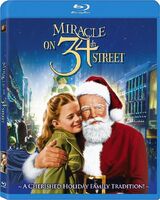 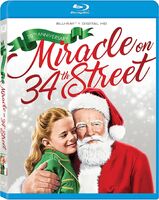 The film won the 1947 Academy Awards for Best Actor in a Supporting Role (Edmund Gwenn, who said "Now I know there's a Santa Claus" in his acceptance speech), Best Story (Valentine Davies), and Best Adapted Screenplay. It was also nominated for Best Picture, which it lost to Gentleman's Agreement.

In 2005, the film was selected for preservation in the National Film Registry by the Library of Congress as being "culturally, historically or aesthetically significant", and was officially preserved by the Academy Film Archive four years later.[2] In 2006, it was ranked #9 on the American Film Institute's 100 Most Inspiring Movies of All Time.

References in other Christmas media