Miracle on 34th Street is a 1994 theatrical film which is a remake of the 1947 classic of the same name. It was directed by Les Mayfield and was filmed in and around Chicago, due to the connections of producer/screenwriter John Hughes. This fact alone infuriated the owners of Macy's from allowing him to use their store name for this remake; a fictitious store named Cole's was used in its place. Also, since Gimbel's had gone out of business in 1987, another fictional store called Shopper's Express was used.

When Tony Falacchi, the Cole's Santa Claus, gets drunk before taking part in the Thanksgiving Day parade, Dorey Walker, the store's director of special events, fires him and must find a replacement immediately. She spots an old man berating the drunk Tony, and begs him to take over. He claims his name is Kris Kringle. He does so well during the parade that he is immediately hired to be the store's main Santa for the holiday period. All the children begin to believe that he is the real Santa, with the exception of Dorey's six-year-old daughter, Susan. Dorey's boyfriend and neighbor, Bryan Bedford, does his best to convince Susan to believe. While being babysat by Kris one night, she shares her Christmas wish with him. She would like a dad, a house (used every year for the Cole's catalog photoshoot) and a baby brother. He asks her if she got all those things, she would then begin to believe in Santa. She agrees that she would.

Kris is credited with bringing in many more sales to Cole's than previous years until one night, when he is arrested and sectioned for supposedly assaulting a man on the street. Later, the truth emerges, that the man he assaulted was Tony, who set him up to be arrested, with the help of staff from Shopper's Express.

With the help of Bryan, Dorey pushes Kris' case to court, and drums up support from him from the public. It soon becomes clear that to get him acquitted and freed, Bryan must prove that not only does Santa exist, but that Kris is the real one. It is a seemingly impossible task until he comes up with a plan that requires some help from Susan. The next day in court the proceeding is interrupted by her giving Judge Henry Harper a Christmas card with a $1 bill inside. He notices a red circle on a specific part of it, which says "In God We Trust". He realizes that it was issued like all money by the government which represents the people, and if they can believe in God enough to have this message printed on legal tender on faith alone without any physical proof then by that same logic he can say that Santa exists in the form of Kris Kringle.

Following the court case, Dorey and Bryan are manipulated by Kris into realizing their true feelings for each other, and married in a very small ceremony after the Christmas Eve Midnight Mass. On Christmas morning, Susan wakes to the news of the marriage and is elated to see that she has part one of her Christmas wish, a dad. Together, Susan, Dorey, and Bryan drive out to the catalog house and upon arrival, they find that Kris has arranged for them to purchase it. Susan, now having got two out of three of her wishes, excitedly runs into the house to look at her bedroom. Dorey and Bryan ask her what part three of her Christmas wish was, and she triumphantly announces that it was a baby brother. They both look at each other, shocked, before glancing down at Dorey's stomach. The film ends with the belief that Susan has now gained all three of her Christmas wishes.

The film's full score, composed and conducted by Bruce Broughton, was released by Intrada Records in 2002 as the eighth volume of their "Special Collection" album series. The track listing was as follows: 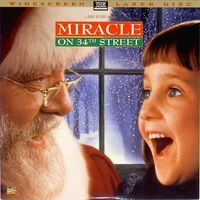 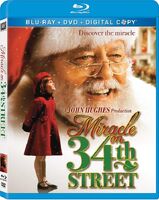 * - Nominated for a 1995 Saturn Award for Best Supporting Actor

Retrieved from "https://christmas-specials.fandom.com/wiki/Miracle_on_34th_Street_(1994)?oldid=160158"
Community content is available under CC-BY-SA unless otherwise noted.