The Muppets
Miss Piggy is one of the central characters from the television series The Muppet Show. She began as a minor character in the series, but gradually developed into one of the central characters of the show. She is a prima-donna pig who is convinced that she is destined for stardom, and nothing will stand in her way. She presents a public face which is the essence of feminine charm, but can instantly fly into a violent rage whenever she thinks she has been insulted or thwarted. Kermit the Frog has learned this all too well; when she isn't smothering him in (usually unwanted) kisses, she's sending him flying through the air with a karate chop. 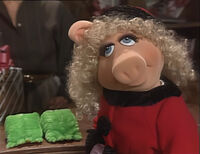 Miss Piggy finds the perfect present for Kermit in A Muppet Family Christmas. 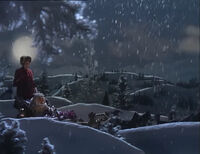 Miss Piggy riding on dogsled in A Muppet Family Christmas.

Miss Piggy as Mrs. Cratchit in The Muppet Christmas Carol.

Miss Piggy in A Muppets Christmas: Letters to Santa. 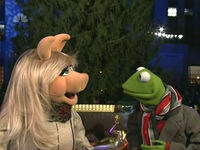 Piggy with Kermit in the 2008 broadcast of Christmas in Rockefeller Center.
Add a photo to this gallery

Retrieved from "https://christmas-specials.fandom.com/wiki/Miss_Piggy?oldid=191677"
Community content is available under CC-BY-SA unless otherwise noted.