"Monster Monster Day" is the Christmas episode of the CBeebies television show The Furchester Hotel.

Today is Elmo's favorite holiday - Monster Monster Day! As explained by Phoebe, every year, Monster Monster picks the friendliest hotel in town to visit. He lands on the roof, signaled by the blinking nose on his statue, comes down the lift and sings the "Monster Monster Day Song" with everyone. The hotel is decked out in furry decorations, including the "fuzzle-toe" for Funella and Furgus to hug under. Harvey P. Dull doesn't enjoy the festivities; he'd rather read his book.

A slight problem arises when one guest's luggage is stuck in the lift, which would prevent the arrival of Monster Monster. The monsters all pull, but it won't budge. Phoebe thinks they need to rub it with something slippery to pull it out, but Cookie Monster has used all the butter to make some Monster Monster Day cookies. A guest slides by, Ms. Soap, who offers to rub herself over the luggage. As Monster Tea Time begins, one of the Tea Time Monsters helps them pull it from the lift.

Elmo watches eagerly for Monster Monster to come, but the lift shows no sign of anything, when his statue light illuminates. Elmo becomes disappointed, making Mr. Dull feel bad as well. To cheer Elmo up, he runs off and returns in the lift dressed as Monster Monster. Soon, the real Monster Monster shows up (he had parking problems)! Elmo sees through Mr. Dulls disguise now and thanks him for helping out. All the guests, furry or otherwise, join Monster Monster in the holiday song.

The show's title with snow on background. 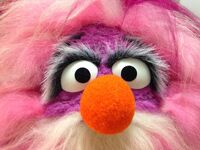 A Monster Monster puppet used for the episode resembles a modified version of Humphrey.