The Year Without A Santa Claus
The Santa Clause 2 & 3
A Miser Brothers' Christmas
Mother Nature is a common personification of nature that focuses on the life-giving and nurturing aspects of nature, who has managed to appear as a character in a few Christmas productions.

Mother Nature is most notably featured as the mother of Snow Miser and Heat Miser in the Rankin/Bass special The Year Without a Santa Claus. (Like her sons, she was not in the original poem that the special is based on.) In the special, she administers her duties from an isolated island-like location among the clouds where she serves tea to visitors and keeps forest animals as company. She is shown to possess great power illustrated in the form of physical displacement transportation by way of lightning, to the point that her very name strikes fear and awe into the hearts of those who know of her. Mrs. Claus comes to visit Mother Nature during the special in order to get her help settling a dispute between Heat Miser and Snow Miser concerning the weather in Southtown for Christmas. Despite (or perhaps in ignorance of) Heat Miser trying to shoot down Jingle, Jangle and Vixen at the beginning of the special, Mother Nature believes her sons to be nice boys deep down.

This version of Mother Nature reappears with a new design in the sequel, A Miser Brothers' Christmas, in which she is shown to have a big family consisting of children who represent different natural phenomena in addition to the Miser Brothers: Earthquake, Thunder and Lightning, the Tides, and the Winds, one of whom is the special's villain, North Wind. In the special, Mother Nature tells Heat Miser and Snow Miser that they must take over for Santa after a sled accident. Unbeknownst to her, the accident was caused by North Wind, who is attempting to take down Santa so he can take over Christmas, even if it mean manipulating his miserly brothers to fight each other. Eventually, after the Miser brothers stop North Wind in his plans, Mother Nature, arriving in time, assures everyone that North Wind will be doing household chores for the next several thousand years as punishment for trying to take down Santa and turn his brothers against each other.

Mother Nature appears as a supporting character in The Santa Clause 2 and The Santa Clause 3: The Escape Clause. In these films, she is depicted as the head of the Council of Legendary Figures.

In the 2004 direct-to-video feature In Search of Santa, Eugene mentions Mother Nature to Crystal in his devolution theory, saying that the penguins that she made were "flightless waterfowl". 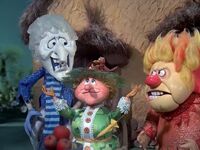 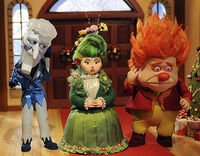 In A Miser Brother's Christmas.

Mother Nature and Father Time in The Santa Clause trilogy.
Add a photo to this gallery

Retrieved from "https://christmas-specials.fandom.com/wiki/Mother_Nature?oldid=191390"
Community content is available under CC-BY-SA unless otherwise noted.