In Rudolph the Red-Nosed Reindeer, Mrs. Donner offers to help her husband go looking for Rudolph after he runs away. Despite Donner telling her not to help him, she helps him look for Rudolph anyway, accompanied by his girlfriend, Clarice. All three are soon captured by The Abominable Snowmonster of the North, but Rudolph arrives to rescue them.

Mrs. Donner also appears in flashbacks to Rudolph's youth, shown in Rudolph's Shiny New Year and Rudolph and Frosty's Christmas in July, but is absent from Rudolph the Red-Nosed Reindeer and the Island of Misfit Toys. 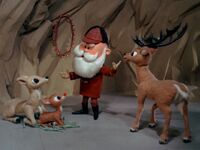 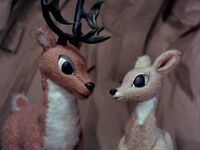 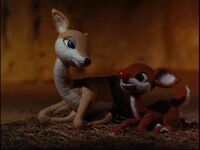 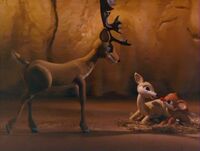 Add a photo to this gallery
Retrieved from "https://christmas-specials.fandom.com/wiki/Mrs._Donner?oldid=186191"
Community content is available under CC-BY-SA unless otherwise noted.