The film debuted at #2 at the box-office while grossing $11,750,203 during the opening weekend, behind Back to the Future Part II. The movie eventually topped the box-office charts in its third week of release and remained #1 the following weekend. It went on to gross a total of $71,319,546 in the United States while showing in movie theaters.[1]

The film begins with Clark Griswold taking his family - consisting of his wife, Ellen, their daughter, Audrey, and son, Rusty - on the search for a perfect Christmas tree. After aggravating nearby motorists, getting stuck under a big rig, and walking in the woods for a long time, he finally finds the tree he's looking for. Unfortunately, because they forgot to bring a saw or any tools to cut it down, Clark is forced to dig it out of the ground. When they bring it home, he breaks several windows and gets covered in tree sap setting it up, as it barely fits in the yard, let alone the living room.

Later, while shopping for gifts at a downtown Chicago department store, Clark meets a saleswoman named Mary. He makes a series of Freudian slips to her on their first encounter, and later fantasizes about her skinny-dipping in his future pool (interrupted by his cousin-in-law's daughter).

Clark has been working on a project at his firm which he expects will bring in a good Christmas bonus. He plans to use the bonus to put in a swimming pool, which he has already laid down a $7,500 deposit on.

As Christmas approaches, the many relatives of Clark's extended family begin arriving to stay with him. His and Ellen's parents are the first to arrive. This drives him to go set up the lighting on the house with Rusty. He covers nearly every inch of the home's exterior and yard with lights (according to himself, a grand total of 25,000 Christmas lights). He becomes very frustrated after many attempts to get them working. Unknown to him, the electricity wasn't on to begin with. When Ellen heads to the back store room to get something, she flips a light switch, lighting the house (and causing the power plant to switch to nuclear generators for backup power), and blinding their unfriendly yuppie neighbors. After the lights are up and running, Ellen's cousin and cousin-in-law, Eddie and Catherine, along with their children, show up to stay with him for a month, with their dilapidated, rusty RV parked in the driveway the whole time. Stifling his disappointment at their surprise arrival proves difficult for Clark. However, he and Ellen are concerned about Eddie's children, as they won't have many, if any, gifts for Christmas, due to Eddie's seven year unemployment. Later on, Clark treats Rusty, Eddie, Catherine, and others to a sledding trip. He then adds a sheeting of a "Non-Choloric, Silicon-Based Kitchen Lubricant" that his company had made, but results in the chemical compound shooting him at 800 mph for about one mile, leading to him becoming severely injured.

On Christmas Eve, the eldest relatives, Uncle Lewis and Aunt Bethany, arrive for dinner. Numerous disasters occur that evening: the turkey is cooked for far too long and it dries out, Aunt Bethany's white Persian cat is electrocuted when it chews on a strand of Christmas lights, Uncle Lewis burns the tree down while lighting a cigar, forcing Clark to quickly search for a replacement. He takes one from the yard and sets it up, and a maniac squirrel leaps out and "terrorizes" everyone. A delivery from the company arrives at the house that evening, everyone expecting it to be the long-awaited bonus. Unfortunately, Clark's boss cut out bonuses without informing his employees. As a substitute, Clark is enrolled in the "Jelly of the Month" club.

Clark has now reached his boiling point, going through several outbursts out of severe frustration. Everyone attempts to leave due to the events of the evening. Eddie then kidnaps Clark's boss, and he finally sees reason about the Christmas bonuses. A SWAT team, called by Ellen, raids the home, but he explains that it is all a misunderstanding and admits he was wrong to withhold bonuses from his employees. He then decides to give Clark his bonus, along with an added 20%.

Uncle Lewis' cigar ignites the gas from the sewage Eddie had earlier dumped down the storm drain while emptying the holding tank on his RV, blasting a Santa ornament into the sky. The film ends as Aunt Bethany sings the National Anthem as everyone watches the strange but touching sight, as Clark realizes his dream of the perfect, albeit weird, family Christmas.

The film's score was composed by Angelo Badalamenti and conducted by Shirley Walker.

This is the only installment of the National Lampoon's Vacation movies that does not include Lindsey Buckingham's song "Holiday Road". 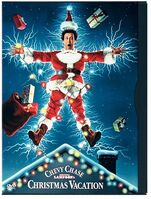 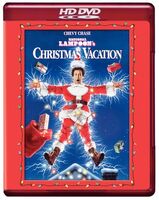 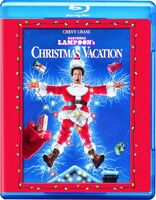 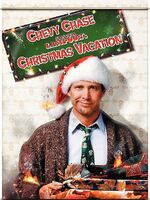 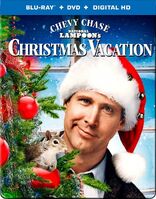 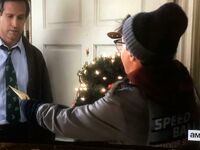